Congress Should Ensure VA Health Care Funding, but Only Within Budget Caps 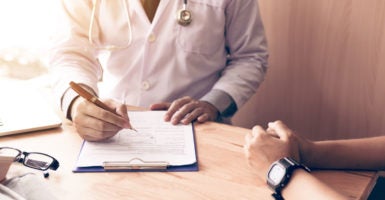 The appropriations process in Congress came to an unexpected halt July 19 as heated debates over funding the Department of Veterans Affairs could not be resolved.

That hurdle was preceded by a summer of controversy regarding the reform of veterans’ health care funding. The outcome of those negotiations will affect not only our nation’s finest, but also the broader spending process.

The discussion began in early June, when President Donald Trump signed into law the VA MISSION Act of 2018. The legislative overhaul aims to improve veterans’ health care by increasing funding for private care options and consolidating those options into one program.

The first year would require a direct appropriation in the amount of $5.2 billion for the Veterans Choice Program. After one year, the Veterans Community Care Program will supplant it as the consolidated private care program within the VA.

The Congressional Budget Office estimates that the program will cost $46.5 billion over the 2019-2023 period, assuming necessary appropriations.

The Committee for a Responsible Federal Budget recommended paying for the Veterans Community Care Program appropriation with savings from other programs. While the final bill did not include such provisions, current law and spending cap restrictions require appropriators to pay for the Veterans Community Care Program by funneling money from other discretionary spending programs annually.

Unsurprisingly, appropriators in the House and Senate are seeking to scrap those requirements, demanding an additional $1.6 billion to keep the program funded through 2019 and setting off a debate that shut down conference negotiations for the energy and water/military construction and Veterans Affairs appropriations bill.

Busting the caps, they argue, is necessary to provide the quality care our veterans deserve.

In isolation, that busting of caps might seem worth the cost. After all, our veterans deserve the best.

The problem is that busting caps has serious long-term fiscal effects that will only worsen our budgetary crisis. While it may only be $1.6 billion this year, it isn’t difficult to foresee that number climbing into the tens or even hundreds of billions over the next decade.

We’re now reaching $150 billion in spending outside of cap limitations, and adding VA spending to the pile worsens the situation while also setting bad precedent.

The proposal is ultimately part of a broader narrative, one that hopes to remove caps from the budgeting process entirely.

Doing so would be a mistake.

These caps force legislators to think seriously about their spending habits and could be effective measures to keep new spending out of the federal budget. They also mandate discussion about the efficacy of discretionary programs and the priorities of policymakers on an annual basis.

One of the characteristics of good governance is accountability, and ensuring annual discussion of fiscal appropriations is critical to that end.

Unfortunately, lawmakers are inching toward an appropriations process that is neither fiscally responsible, nor politically accountable.

Some legislators have already proposed softening cap requirements and, in more extreme cases, eliminating them altogether. An amendment offered by Rep. Nita Lowey, D-N.Y., the ranking member of the House Appropriations Committee, would unbind annual appropriations to the Veterans Community Care Program from spending cap limitations.

The Committee for a Responsible Federal Budget estimates that this adjustment would cost $55 billion or more over the next decade. Even worse, should other sections of the VA MISSION Act also be exempt from annual caps, the total cost could rise to more than $100 billion.

Veterans’ health care is important, and improvement of VA services through alternative private facilities is a step in the right direction, but spending cap adjustment proposals like the Lowey amendment are dangerous brush-offs of fiscal responsibility.

Congress needs to carefully deliberate budgetary provisions on a case-by-case basis to keep programs under control. Offsets, whether they come from within VA programs or other federal programs, should be the bare minimum requirement for new spending initiatives.

A feasible long-term strategy for improving veterans’ health care access must include a balanced federal budget, yet we are edging closer to a dire debt situation.

This year, Social Security will dip into its reserves for the first time since 1982, and is projected by its trustees to become insolvent by 2034. By 2023, the United States will spend more on interest than on the military.

The last thing we need is more irresponsibility from Congress for the sake of political expediency.