What Bernie Sanders Isn’t Telling You About Canadian Health Care 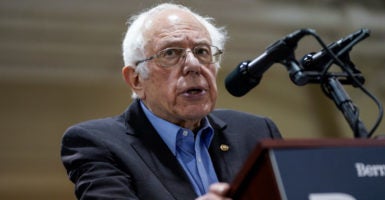 Peter St. Onge, Ph.D., is senior economist at the Montreal Economic Institute. A former assistant professor at Taiwan’s Feng Chia University and general partner of a private equity fund in Washington, D.C., he holds a doctorate in economics from George Mason University.

All Americans, regardless of political party, want access to timely, high-quality health care. The question is how to get there. Do we harness the power and innovation of the private sector, or do we hand it to the government and hope for the best?

Canada has chosen the latter route, and at one of the most recent debates among Democratic presidential candidates, Bernie Sanders once again touted its government-run health care system as a model for America.

Keep in mind these are only the beginning of the financial hits from “Medicare for All.” Canada’s public system does not cover many large health costs, from pharmaceuticals to nursing homes to dental and vision.

As a result, public health spending in Canada accounts for only 70% of total health spending. In contrast, Medicare for All proposals promise 100% coverage. This suggests the financial burdens on Americans, and distortions to care, would be far greater than what Canadians already suffer.

Canada’s limited coverage may surprise Americans, but the key is understanding what “universal” means in “universal care.”

Universal systems mean everybody is forced to join the public system. It emphatically does not mean everything is free. Indeed, out-of-pocket costs are actually significantly higher in Sweden, Denmark, and Norway than they are in America.

More serious than the financial burdens is what happens to quality of care in a government-run system.

Canada’s total health costs are about one-third cheaper than the U.S. as a percent of gross domestic product, but this is achieved by undesirable cost-control practices. For example, care is ruthlessly rationed, with waiting lists running into months or years.

The system also cuts corners by using older and cheaper drugs and skimping on modern equipment. Canada today has fewer MRI units per capita than Turkey or Latvia. Moreover, underinvestment in facilities and staff has reached the point where Canadians are being treated in hospital hallways.

Predictably, Canada’s emergency rooms are packed. In the province of Quebec, wait times average over four hours, leading many patients to just give up, go home, and hope for the best.

Seeing a specialist can take a shockingly long time. One doctor in Ontario called in a referral for a neurologist and was told there was a four-and-a-half year waiting list.

A 16-year-old boy in British Columbia waited three years for an urgent surgery, during which his condition worsened and he was left paraplegic. One Montreal man finally got the call for his long-delayed urgent surgery—but it came two months after he had died.

Canadians have found a way to escape the rationing, the long waits, and substandard equipment. They go to the U.S.

Every year, more than 50,000 Canadians fly to get their surgeries here because they can get high-quality care and fast treatment at a reasonable price. They willingly pay cash for care that, for the vast majority of Americans, is covered by insurance, private or public.

Far from being a model of government-run health care, Canada serves as a warning of the unintended consequences of socialized medicine: high taxes, long waits, staff shortages, and substandard drugs and equipment. Those suffering the most are the poor, who cannot afford to fly abroad for timely treatment.

Far from the feel-good rhetoric, socialized medicine in Canada has proved a bait-and-switch that has never lived up to the promise.

In Washington today, there are very sound proposals on the table to reduce U.S. health care costs. They include reforms to assure price transparency, increase competition, and repeal price-hiking mandates. That is the best way forward.

Canada’s system of socialized medicine has created high taxes and suffering patients. That’s not what Americans want or deserve.