‘Medicare for All’ Proposes Economy-Crushing Taxes on Middle Class 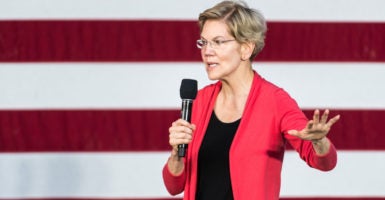 The “Medicare for All” plan revealed by Sen. Elizabeth Warren, D-Mass., shows how hard it is to raise tens of trillions of dollars without leaving typical Americans economically worse off. Pictured: Warren speaks Oct. 26 in Florence, South Carolina. (Photo: Sean Rayford/Getty Images)

No other country in the world has been able to provide government-managed health care without soaking middle-class and lower-income taxpayers with high income and payroll taxes.

The “Medicare for All” plan revealed by Sen. Elizabeth Warren, D-Mass., shows how hard it is to raise tens of trillions of dollars without leaving typical Americans economically worse off.

Despite the headlines, every single new tax the plan proposes either kneecaps economic opportunity for the American middle class or raises their taxes.

Here’s what the plan proposes and some of the well-known problems with each element.

Although the initial tax is proportional to actual health care spending, over time taxes would equalize to a national average, increasing on employers who have kept health care costs down and rewarding employers who provide more comprehensive benefits.

When taxes rise on the half of employers below the national average for health care spending, their employees will be worse off, as increasing taxes means slower wage growth.

Under the plan, big publicly traded businesses with highly paid executives likely also would pay a higher payroll tax rate to compensate for a temporary preferential rate given to businesses with union contracts.

Turning current health care benefits into taxes would create winners and losers at all income levels and businesses sizes.

More IRS Audits: Upping IRS enforcement as a way to raise new revenue is not as easy as it sounds. Raising trillions of dollars in taxes from Americans by having more IRS agents auditing families would increase effective tax rates.

A significant portion of the uncollected “tax gap” is unreported income by independent contractors, tips in the service industry, and rental income. By and large, these are middle-class taxpayers.

One of the plan’s suggestions is to strengthen a reporting system for foreign income, which since going into effect likely has not raised any net revenue. And the cost of implementing and complying with the law outstripped even the rosiest initial revenue projections.

If it works, more IRS enforcement will increase taxes on all Americans. If it does not raise revenue, more enforcement is simply a budget gimmick with high compliance costs.

Eliminating expensing is also a budget gimmick because it simply makes businesses pay taxes before they should be due, accelerating revenue collection.

For businesses, paying taxes on profits not yet earned makes many investments too costly. This change would reduce investment, which translates to lower productivity for workers and, ultimately, smaller wage gains.

Highest-in-the-World Corporate Tax Rate: The plan would raise the federal corporate tax rate back to 35%, the highest rate in the developed world. It also would tax American companies’ worldwide profits, a move that simply would compound the effect of businesses growing and investing less.

Reasonable estimates show that labor bears more than 75% of the revenue cost of the corporate tax.

Financial Transactions Tax: A new tax on all sales of bonds, stocks, or derivatives is not a new idea. The Congressional Budget Office regularly includes it in its yearly list of budget options.

The CBO’s report warns that the tax could “have a number of negative effects on the economy stemming from its effects on asset prices, the cost of capital for firms, and the frequency of trading.”

A financial transactions tax would increase rather than decrease market volatility; it would hurt digital traders, who benefit the market; and it wouldn’t  raise as much revenue as projected.

The tax also would ultimately be paid by American savers through lower investment returns and fewer economic opportunities.

Wealth Tax: A new annual 6% tax on wealth over $1 billion would hurt every American. The tax would be a fundamental departure from our current tax code, adding an entirely new and likely unconstitutional tax system on top of the 70,000 pages of existing tax law.

To some, a 6% tax on billionaires may sound like a small fee to pay, but it’s much more than that. A 6% tax on net wealth earning a 5% return is equivalent to an income tax rate of 120%. That’s in addition to existing and proposed taxes on capital gains, profits, and wage income.

A wealth tax eliminates the incentives for an innovative, dynamic economy.

New Capital Gains Taxes: The proposal calls for changing the way we tax investment income for the highest-income 1% of Americans.

The proposal would require investors to pay higher rates on capital gains before the investment is actually sold. So if the value decreases, the taxes would be levied on phantom profits.

Called mark-to-market taxation, this system would be like asking Americans to pay taxes on the estimated increase in the value of their home, even if they haven’t sold it yet.

The change “would increase the tax burden on savers and increase tax code complexity,” according to the Tax Foundation.

These new taxes are in addition to a multitude of other tax increases Warren has proposed to fund other parts of her agenda. The proposed tax increases would both increase taxes on the middle class and decrease opportunity for all Americans.

The revenue estimates on which the plan is based are the most optimistic projections available and subject to much debate. The proposal also relies on spending cuts and health care savings that are unlikely to materialize.

Taken together, these tax proposals would dramatically shrink the size of the economy and the incentive to work, save, and invest. Smaller, less dynamic economies produce much less tax revenue than those that are growing.

It is mathematically impossible to pay for large new spending programs with only tax increases on high-income Americans. Under an expanded government welfare system, middle-class Americans should expect their taxes to increase dramatically.