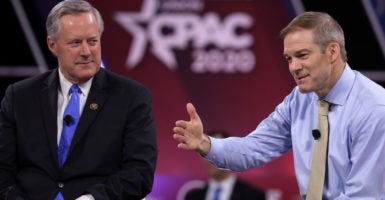 Even with President Donald Trump’s acquittal in the Senate impeachment trial, the left will continue to go after him, several House Republicans predicted Thursday at the annual Conservative Political Action Conference.

“They’re never going to stop,” Rep. Jim Jordan, R-Ohio, told the CPAC crowd. “They tried to overturn the will of 63 million Americans, all of us who voted for President Trump, who won an Electoral College landslide.”

The Republican-controlled Senate acquitted Trump on Feb. 6 of House Democrats’ charges of abuse of power and obstruction of Congress in relation to his July 25 phone call with Ukrainian President Volodymyr Zelenskyy. The two leaders referred to former Vice President Joe Biden and his son, Hunter Biden, who until last year had a lucrative seat on the board of a Ukrainian energy company.

The Democrat-controlled House had voted Dec. 18 to impeach Trump.

Jordan said Americans know the left will come for Trump again because of spying on the Trump campaign by the Obama administration before the 2016 election and the long investigation of Trump campaign ties to the Russian government that turned up nothing.

Democrats already have come up with a new charge about Russia and the 2020 election, Jordan said:

Schiff, D-Calif., is chairman of the House Intelligence Committee and led the impeachment inquiry and prosecution.

House Republicans talked to the CPAC crowd across three panels with the title “The Coup.”

Regarding the FBI’s surveillance of Trump campaign personnel in 2016, Rep. Mark Meadows, R-N.C., called for action when Congress renews the Foreign Intelligence Surveillance Act, under which the FBI obtained warrants to spy.

“We are right in the middle of reauthorizing the FISA process,” Meadows said. “Shame on any member of Congress and any senator, including Republicans, if we reauthorize it without reforming it.”

Meadows said impeachment was to be expected for a disrupter such as Trump.

“I mean, when you fight the swamp, the swamp fights back. It is time we had a victory over the swamp,” Meadows said. “Here is the problem: Most of the people here in D.C. recognize it’s a swamp if you are a visitor here. You can see it. If they are part of the swamp, they think it is a hot tub.”

Special counsel Robert Mueller determined there was no conspiracy between the Russian government and the Trump campaign to meddle in the 2016 campaign.

Collins noted the poor performance of Mueller in front of congressional committees after he released his report, which spurred Democrats to move from pursuing Trump over Russia to pursuing the president over his interest in what went on in Ukraine during the Obama administration.

“When Mueller came before the committees and basically—well, you know what he did—they said, ‘Oh my God, what are we going to do?’” Collins told the crowd. “So, they just transitioned into this sham impeachment. Adam Schiff can’t even spell the truth, much less tell it.”

“My thinking is that Bill Barr is doing a great job in getting this cleaned up as best he can,” Collins said. “I do believe, however, that McCabe should have been prosecuted.”

It’s no surprise that House Democrats impeached Trump since they were talking about it before winning a majority in 2018, Rep. John Ratcliffe, R-Texas, told the CPAC crowd.

What was a surprise for Ratcliffe, a former U.S. attorney, was the lack of due process for Trump by the standards of past impeachment proceedings.

“We say it’s unprecedented, unlike anything that has ever happened before,” Ratcliffe said, adding:

The most telling thing is during the [Richard] Nixon impeachment, the formal impeachment inquiry itself lasted 178 days from the very first day to the very last day to assess evidence, review evidence, call witnesses, cross-examine witnesses.

The same was true with regard to President [Bill] Clinton. From the very first day to the very last day, his lawyers were allowed to do all of those same things.

It just lowers the bar. We are going to see this again down the road. I don’t think we can put the genie back in the bottle.