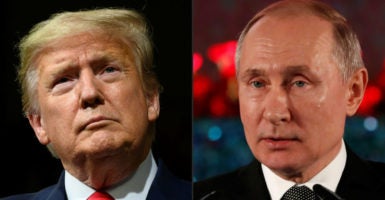 "They said today that Putin wants to be sure that Trump gets re-elected. Here we go again," President Donald Trump says of Democrats' latest insinuation that he is in cahoots with Russian President Vladimir Putin, right. (Photos: Jim Watson and Emanuel Dunando/AFP/Getty Images)

Democrats are raising a ruckus about a news report that Russia plans to meddle in the 2020 presidential campaign to help reelect President Donald Trump.

But further Russian election interference was expected, as special counsel Robert Mueller told Congress last year after his report about Moscow’s meddling in the 2016 campaign.

Here’s what to know about the newest reports about what Russia is up to.

Several intelligence agencies reported in 2017 that Russian President Vladimir Putin ordered an effort to meddle with the U.S. presidential campaign, with a clear preference for Trump over the 2016 Democratic candidate, Hillary Clinton.

The Russians hacked the Democratic National Committee and paid more than $100,000 for Facebook ads.

After an investigation lasting nearly two years, Mueller concluded in a 448-page report that “the investigation did not establish that members of the Trump campaign conspired or coordinated with the Russian government in its election interference activities.”

The Times report said the Russians are “undeterred by American efforts to thwart them,” and have made “more creative use of Facebook and other social media.”

The Times story, online Thursday and in the newspaper Friday, does not allege any collusion or conspiracy between Trump or his 2020 campaign and the Russians.

“Russian operatives are working to get Americans to repeat disinformation, the officials said,” the Times story says, referring to unnamed sources. “That strategy gets around social media companies’ rules that prohibit ‘inauthentic speech.’”

The Times also reported that Russian hackers “infiltrated Iran’s cyberwarfare unit” to target the U.S. and make it appear the action came from Iran.

2. What Did Trump Have to Say About It?

Trump tackled the issue head-on at a rally Friday afternoon in Las Vegas. The president said that he has dealt with “three years of witch hunts and partisan Democrat crusades.”

The crowd booed over the reference to the news report.

The Senate voted against removing Trump from office after a trial.

3. What Does New Information Say About Intelligence Community’s Politics?

The New York Times’ story is based on a Feb. 13 briefing conducted by intelligence officials for the House Intelligence Committee, which Schiff chairs.

The Times reported that Trump was angry at his outgoing acting director of national intelligence, Joseph Maguire, for allowing the briefing to take place.

Trump has replaced Maguire with Richard Grenell, the U.S. ambassador to Germany.

Schiff tweeted that this move backs up his point about Trump being untrustworthy because he welcomes foreign interference in U.S. elections.

“We count on the intelligence community to inform Congress of any threat of foreign interference in our elections,” Schiff tweeted. “If reports are true and the President is interfering with that, he is again jeopardizing our efforts to stop foreign meddling. Exactly as we warned he would do.”

Trump long has publicly suspected that powerful members of the intelligence community have a political bias.

CNN anchor Jake Tapper, not known for fairly covering Trump,  reported Friday that his sources challenged much of the narrative pushed by the Times story about Russia trying to reelect Trump.

“A national security official I know and trust pushes back on the way the briefing/ODNI story is being told, and others with firsthand knowledge agree with his assessment,” Tapper says in a series of eight tweets, referring to the Office of the Director of National Intelligence. “What’s been articulated in the news is that the intelligence community has concluded that the Russians are trying to help Trump again. But the intelligence doesn’t say that, the official says … ”

“This shows that the president is still faced with people in the bureaucracy that want to impede and destroy his presidency. It also shows how intelligence is being politicized,” Flaherty said. “Intelligence should bear some resemblance to reality. It would seem the Kremlin would want Democrats to win.”

“Someone in the bureaucracy seems to be coordinating with Schiff,” Flaherty said. “But they are not offering specifics. If they have specifics, make them public.”

4. How Long Has Russia Meddled in U.S. Campaigns?

The fact that Russia plans to interfere in the 2020 presidential election shouldn’t come as a shock to anyone, said J. Christian Adams, a former Justice Department lawyer who is now president of the Public Interest Legal Foundation, an organization that advocates election integrity.

“This is what Russia always does. It’s not surprising, and it’s not going to stop,” Adams told The Daily Signal. “The Times and the left ignored interference in campaigns from Moscow from 1932 to 2017. The Democratic Party completely ignored it in the 1980s, and suddenly they are interested.”

What Russia did in 2016—particularly with social media—is largely a more high-tech means of doing what it previously has done, Adams said.

“Social media trolling is just propaganda that Russia has used since 1932,” Adams said. “Hacking is a cybercrime. When Russians hacked the DNC [Democratic National Committee] and John Podesta’s emails, it was a way to [mine] political intelligence, but it didn’t affect the election process.”

Past instances of Russian interference in American elections include 1948, when the Soviet Union backed the Progressive Party, whose candidate for president was Henry Wallace. Wallace, who served as vice president under Franklin D. Roosevelt, split with the Democratic Party over President Harry Truman’s hawkish stance during the Cold War. Truman fired Wallace as secretary of commerce.

“If it had not been for the Communists,” journalist I.F. Stone wrote at the time, “there would be no Progressive party.”

But Wallace got just 2% of the popular vote and no electoral votes, coming in fourth place behind incumbent Truman, Republican Thomas Dewey, and States Rights “Dixiecrat” Party candidate Strom Thurmond.

In another instance, Sen. Ted Kennedy, D-Mass., covertly reached out to Soviet leaders during two election cycles, while he was a presidential candidate in 1980 and ahead of the 1984 election, when President Ronald Reagan won his second term.

In 1980, Kennedy challenged President Jimmy Carter for the Democratic nomination. According to Soviet archives, Kennedy sent former Sen. John Tunney, the California Democrat defeated for reelection in 1976, as a liaison to Soviet officials in March 1980.

As documented in Paul Kengor’s book, “Dupes,” Tunney informed the Soviets that Kennedy supported the policies of then-Soviet leader Leonid Brezhnev and was concerned about an “atmosphere of tensions” in the Cold War “fueled by Carter.”

The KGB archives describe Kennedy’s words as “acceptable to us.”

Carter beat Kennedy for the nomination, but lost in a landslide to Reagan in November. Kennedy again made overtures to the Soviets in 1983, seeking to prevent Reagan’s reelection.

Related correspondence first was reported Feb. 2, 1992, in the Times of London under the headline “Teddy, the KGB and the Top Secret File.” Kengor revealed the entire file in his 2006 book “The Crusader: Ronald Reagan and the Fall of Communism.”

In a letter addressed to then-Soviet leader Yuri Andropov dated May 14, 1983, KGB head Viktor Chebrikov explained that Kennedy was eager to “counter the militaristic policies” of Reagan and undermine the president’s reelection chances.

Kennedy reportedly suggested doing so by helping the Soviet leader set up interviews with American TV news anchors Walter Cronkite and Barbara Walters, among others. Andropov died later that year, and didn’t get a chance to act on Kennedy’s advice with regard to the 1984 election.

Kennedy’s outreach and Tunney’s trips are documented in the Mitrokhin papers filed with the Cold War International History Project of the Woodrow Wilson Center in Washington. The papers are named for Vasili Mitrokhin, a former KGB agent who defected to Britain from the Soviet Union in 1992.