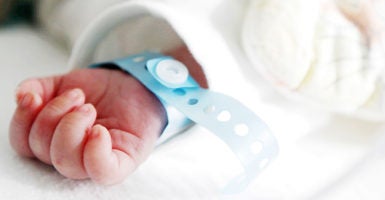 Sofia Khan's son (not pictured) lived for more than an hour after being born alive following an abortion procedure, but with no effort to save his life, the baby died. (Photo: Vladimir Nenov/ EyeEm/Getty Images)

Her abortion was supposed to be “100% effective.” That’s what doctors told Sofia Khan when she found out her unborn son had spina bifida.

“We were heartbroken,” she told the U.K.’s Sun, “but we made the decision to terminate. We felt it was best for the baby, but even so, I had moments of doubt and guilt.” But that doubt and guilt gave way to horror the day her procedure came—and her baby was born alive.

The lethal injection to her womb was supposed to still the baby’s heart, but hours after the procedure she panicked. She could feel her son “wiggling around”—something the midwife called “impossible.” The doctors did two scans and insisted there was no heartbeat.

“It was a relief to know his suffering was over but heartbreaking that he was gone,” Khan admitted.

She was transferred to the hospital, where she started to have a strange feeling. “I felt the baby kick,” she insisted to the staff. “I asked her to put the monitor on to be sure, but she said there was no need.”

Ten hours later, instead of giving birth to a dead baby, she heard crying.

“The midwife went into shock. She was screaming for help, [running] with the baby into the corridor. They brought him back and said: ‘What do you want us to do?’ and I didn’t know what they meant. I held him and cuddled him and told him how much I loved him.”

He lived for more than an hour, but with no effort to save his life, their baby died.

A year and a half later, Khan still hasn’t recovered.

“[H]is birth and death were so much more traumatic, because I just wasn’t prepared for it—nobody was. Nobody had listened to me when I said I felt him kicking. Nobody believed me.”

The shock and loss she feels now are so powerful, Khan tells people. “I don’t think that will ever leave me. I think about my little boy every day.”

During an official inquiry, doctors insisted that the procedure had gone according to plan.

“The hospital … offered their condolences to me, but it doesn’t feel to me like they have actually apologized … I have been told it was very, very unfortunate and very rare, and that, in the future, women will be told that the procedure is not 100% effective. But I don’t know why it happened to me. I do feel angry with the hospital. I feel angry that I wasn’t listened to.”

Khan’s story is harrowing and tragic—but it is not, as doctors told her, rare. Here in America, we’ve heard that argument so often from Democrats that it’s nauseating. These are men and women in Congress or applying for the job of president who either won’t admit infanticide happens—or worse, justify it when it does.

Nurse Jill Stanek, who witnessed so many heartbreaking instances of infanticide that she went public, insists it’s still going on. On “Washington Watch,” she stunned people with the frequency she’s seen these babies born alive and then abandoned.

Anybody who’s worked at a hospital that commits induced labor abortion has probably seen it. The doctors induce labor on a baby. They think it’s very premature and will not survive—or [they think it will] die soon after the birth process.

And sometimes doctors will kill the babies ahead of time by injecting the baby’s heart through the mom’s abdomen with [drugs] … that causes instant cardiac arrest. And sometimes they will not.

In the event of Christ Hospital, the spokesperson at the time that I went public admitted to the Chicago Sun-Times that between 10 and 20% survive there for a short period. So that’s between 1 in 10 and 1 in 5. And my experience was the number was much higher …

What Democratic Virginia Gov. Ralph Northam was describing about “keeping babies comfortable” until they died, Stanek said, “was exactly what I experienced at Christ Hospital.

“I submitted photos that I took of the comfort room with my [Senate] testimony [last week] and concluded by saying, ‘How far will doctors go to make themselves comfortable with aborting babies alive and letting them die? And the answer is, it’s pretty clear they’ll go far.”

There is absolutely no good argument for intentionally destroying a newborn life. Democrats can claim it’s rare, but they can never say it’s right.