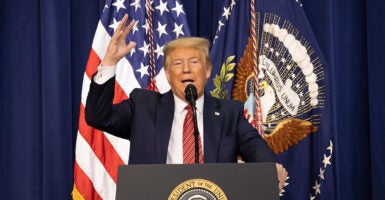 President Donald Trump accused Los Angeles Mayor Eric Garcetti of endangering his community after the Democrat announced the city’s police department will not cooperate with U.S. Immigration and Customs Enforcement.

Garcetti released a video Friday announcing that city police would not be helping federal immigration authorities, and also instructed illegal aliens on what to do if they are apprehended by an ICE agent.

In response, Trump said the mayor not only was putting lives at risk, but also telling illegal aliens to “beat the system.”

“Regardless of your immigration status, I want every Angeleno to know your city is on your side. Here in Los Angeles, our police department does not coordinate with ICE or participate in immigration enforcement,” Garcetti tweeted Friday.

The mayor’s tweet included a video instructing illegal aliens how to respond if they are approached by a federal agent.

“Remember—you have the right to remain silent. You don’t have to open your door to an ICE agent that doesn’t have a warrant signed by a judge. You have the right to speak to a lawyer before signing any documents or speaking to law enforcement,” Garcetti says in the clip, standing beside Los Angeles Police Chief Michel Moore.

Moore repeated Garcetti’s announcement that his police force would not enforce immigration law—brushing it off as a federal matter.

The video, however, did not receive a laudatory reaction from the White House.

“The Mayor’s efforts to shield illegal aliens endangers the lives of the public and law enforcement who have to go into the field to apprehend those released,” Trump tweeted Tuesday. “He shouldn’t be urging illegals to beat the system, he should be urging them to safely turn themselves in!”

Like many sanctuary cities across the country, Los Angeles officials do not cooperate with ICE agents. Namely, the city’s authorities do not honor ICE detainers. The rules fall largely in line with a statewide law that forbids local authorities from working with the agency in almost any capacity.

Trump has hammered sanctuary policies, arguing that they put the community at risk. For his latest State of the Union address, the president invited as one his guests Jody Jones—the brother of a man who was killed by an illegal alien in California who was wanted by ICE, but was released into the public because his detainer was ignored.

Trump on Friday invited Daria Ortiz to the White House, the granddaughter of an elderly woman whom police say was killed by an illegal alien in New York City.

Much like Jones’ brother, police said Ortiz’s grandmother was killed by an illegal alien who was wanted by ICE, but released out of local custody after authorities refused to honor the immigration detainer placed on him.