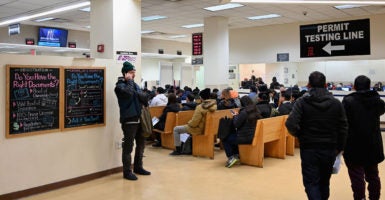 People wait at the New York State Department of Motor Vehicles office at Atlantic Center in the Brooklyn borough of New York Dec. 18, 2019. A new state law allows New Yorkers age 16 and older to apply for a standard, not for federal purpose, noncommercial driver's license or learner's permit regardless of their citizenship or lawful status in the United States. (Photo: Angela Weiss/AFP/Getty Images)

Signed by Democratic Gov. Andrew Cuomo late in 2019, the Green Light Law prevents DMVs across the state from sharing information with Immigration and Customs Enforcement and Customs and Border Protection. This restriction prevents the federal government from knowing whether someone has a DUI or aggravated driving record when they apply for a Trusted Traveler Program.

The law—the latest in the U.S. that seeks to limit the capabilities of federal immigration authorities—has garnered immense pushback from law enforcement officials across the state. Cutting, one of the many sheriffs in the state who oppose the law, called it chaotic.

“You’re creating an atmosphere of chaos, and [New York officials] need to allow law enforcement to work with our federal partners in getting those people off the street,” Cutting told The Daily Caller News Foundation.

“I’m truly concerned. I’m concerned on the direction we’re going. I’m concerned with the state of our state,” he continued. “[The Department of Homeland Security] has a responsibility. That was almost the mandate put forward after 9/11—to protect the public.”

Not only does the Green Light Law in New York prevent DMV information sharing with federal authorities, but it also allows illegal aliens to obtain driver’s licenses with foreign documentation. Fourteen states in the U.S. have similar laws allowing licenses to their undocumented community, but New York is the state to prohibit the information sharing.

Cutting, a law enforcement professional for over three decades, is no fan of the rules.

“In my opinion of the Green Light Law, I think it’s another one of those laws that was hastily put together. It was not well thought out. Again, they didn’t have law enforcement involved in the decision,” he said. “Now that you have the green laws in place, it’s certainly going to impact our ability to get information to a lot of our federal partners.”

Cutting spoke to The Daily Caller News Foundation during his visit to Washington, D.C., for the winter meeting of the National Sheriffs’ Association. Attorney General William Barr addressed the convention and specifically addressed New York’s new law—one of the many spats between the administration and the state’s leaders.

Amid the furor of the Green Light Law, Cuomo has indicated he might back down somewhat on its restrictions, but a comprise has yet to be reached.

In the meantime, New York sheriffs like Cutting are left disappointed by their elected leaders.

“We don’t go into these professions to get rich. We’re here for public safety. We’re here to protect our communities,” Cutting said. “We work hand-in-hand with our public partners to try and put forth policy and take care of our communities.”