‘I’m Not Going to Be Bullied’: Barr Speaks on Roger Stone Case 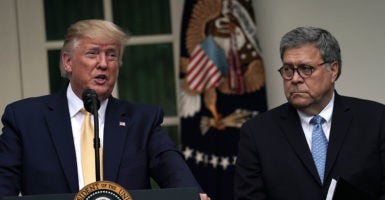 President Donald Trump makes a statement on the census with Attorney General William Barr in the Rose Garden of the White House on July 11, 2019 in Washington, D.C. (Photo: Alex Wong/Getty Images)

“I think it’s time to stop the tweeting about Department of Justice criminal cases,” Barr told ABC News’ Pierre Thomas in an interview.

Trump on Tuesday blasted federal prosecutors’ recommendation that Stone serve up to nine years in prison for a conviction that stemmed from a case that started under the special counsel.

Trump called the recommendation a “miscarriage of justice,” and suggested he might pardon Stone, his longtime associate.

The U.S. attorney’s office in Washington, D.C., which handled Stone’s case, submitted a new sentencing recommendation for the GOP operative, saying he deserved to spend time in prison, but for “far less” time than initially proposed.

Barr came under intense scrutiny from Democrats who accused him of doing Trump’s bidding.

Trump did not help matters when he thanked Barr in a tweet Wednesday for “tak[ing] charge” of the Stone case.

Barr said Thursday that it was “preposterous” to suggest that he intervened in the Stone case to lower the sentence at Trump’s request.

“I’m not going to be bullied or influenced by anybody … whether it’s Congress, a newspaper editorial board, or the president,” Barr told ABC.

“I’m gonna do what I think is right,” he continued, adding, “I cannot do my job here at the department with a constant background commentary that undercuts me.”

“Yes,” he said when ABC’s Thomas asked if Trump’s tweets bother him.

“Well, I have a problem with some of, some of the tweets. As I said at my confirmation hearing, I think the essential role of the attorney general is to keep law enforcement, the criminal process sacrosanct to make sure there is no political interference in it. And I have done that and I will continue to do that,” said Bar.

“And I’m happy to say that, in fact the president has never asked me to do anything in a criminal case.”