‘Extremely Alarming’: Journalists Are Worried About Trump Allies Digging Up Their Old Tweets 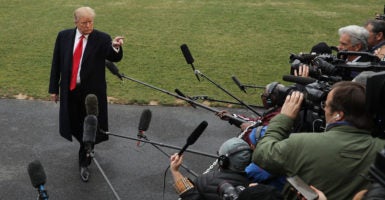 Some journalists are irate over a New York Times story about allies of President Donald Trump collecting damaging information on reporters from “news organizations deemed hostile” to the president.

This is “the latest step in a long-running effort by Mr. Trump and his allies to undercut the influence of legitimate news reporting,” according to the article. It adds that the group responsible has previously released information about journalists from The Washington Post, The New York Times, and CNN, “three outlets that have aggressively investigated” Trump.

“This is an extremely alarming piece and should worry anyone who cares about independent journalism,” Lydia Polgreen, editor-in-chief of HuffPost, tweeted. Polgreen previously worked at The New York Times.

A CNN spokesperson replied in The New York Times article that when “those working on their behalf, threaten and retaliate against reporters as a means of suppression, it’s a clear abandonment of democracy for something very dangerous,” CNN’s Brian Stelter tweeted.

Patrick Healy, a New York Times politics editor, called it an “orchestrated operation by allies of the White House to attack journalists by manipulating & exaggerating information.”

“The Times will not be intimidated or silenced,” NYT publisher A. G. Sulzberger said in a new story revealing an orchestrated operation by allies of the White House to attack journalists by manipulating & exaggerating information. https://t.co/haH07ZPT9g via ?@nytimes?

“This represents an escalation of an ongoing campaign against the free press. For years the president has used terms like ‘fake news’ and ‘enemy of the people’ to demonize journalists and journalism,” New York Times publisher A.G. Sulzberger wrote in a statement to staff. “Now, the political operatives behind this campaign will argue that they are ‘reporting’ on news organizations in the same way that news organizations reported on elected officials and other public figures. They are not.”

From a statement today that publisher A.G. Sulzberger sent to the staff of The Times: pic.twitter.com/yKaWJqHm5W

Aki Peritz, an author and analysis at AU’s School of International Service, suggested that “someone will eventually be murdered” because of the operation. He also wondered who was funding the group’s efforts, tweeting, “I’m sure we won’t be surprised.”

But what happens is when you push out regular people’s names on a broad enemies list and then amplify it via the conservative industrial media, eventually someone will take action on the “Enemy of the People” rhetoric.

Someone will eventually be murdered.

“And then Bannon, Schwartz, Breitbart etc will claim they had nothing to do with what happens next,” another tweet read.

MSNBC host Joy Reid tweeted out the article and wrote, “Welcome to the age of digital brownshirtism.” The tweet has since been deleted, but was saved by Seth Mandel, executive editor of the Washington Examiner.

“If you’re a conservative journalist, you have been the target of this behavior by leftist ‘think tanks’—which are the same ones spoonfeeding reporters their scoops. So what these reporters are calling a ‘war on the press’ is an admission they’ve been waging this war for years,” Mandel tweeted, hitting back at reporters complaining of the news.