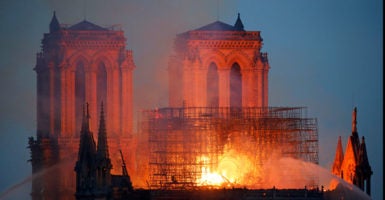 President Donald Trump shared in the world’s horror at news that Notre Dame Cathedral in Paris, a Catholic landmark dating to the 12th century, was being ravaged by fire.

“No cathedral in the world like it,” Trump told a crowd at Nuss Truck & Equipment near Minneapolis, where he spoke at a scheduled event, adding of the fire: “It’s a terrible sight to behold.”

News of the fire Monday evening in Paris came while Trump was aboard Air Force One en route to Minnesota.

Before taking the stage, Trump tweeted: “So horrible to watch the massive fire at Notre Dame Cathedral in Paris.”

The president, like so many others, had a suggestion: “Perhaps flying water tankers could be used to put it out. Must act quickly!”

First lady Melania Trump also took to Twitter to write about the inferno.

According to a press pool report, some in the president’s audience gasped with surprise at his announcement of the fire, apparently not having seen or heard the news yet.

Notre Dame is considered to be one of the world’s finest examples of French Gothic architecture. Its construction was ordered by the bishop of Paris, Maurice de Sully, in 1160.

The blaze came during the most sacred week of the Christian calendar, the day after Palm Sunday and just days before Good Friday and Easter Sunday.

“It’s burning at a level that you rarely see a fire burning,” Trump said of the inferno.

The president said Notre Dame in Paris is “greater than almost any museum in the world.”

“It’s very bad, and it’s looking like it’s burning to the ground,” he said.

Trump called the French landmark “a part of our culture.”

Indeed, the sight transfixed and saddened countless millions around the world, some of whom used Twitter and other social media to express themselves and their sorrow.

The famous spire is gone but the two towers of Notre Dame are “safe,” Laurent Nunez, secretary to France’s interior minister, said.

“The fire is now weaker,” Nunez told media at the scene, CNN reported. “We are now in a time of cooling, but both towers of the cathedral are safe. We’re still working to save the cathedral’s works of art.”

The fire reportedly began accidentally and “may be linked to building [renovation] work at the cathedral,” The Guardian reported.

Faith leaders, other politicians, and ordinary people also took to Twitter to share their thoughts on the fire that overtook Notre Dame.

Here’s just a little of what they had to say.

“Friends, I am absolutely devastated to hear about the fire now engulfing the Cathedral of Notre Dame in Paris,” Robert Barron, auxiliary bishop of the Archdiocese of Los Angeles, tweeted, adding:

I did my doctoral studies in Paris and lived about a fifteen-minute walk from the Cathedral.  Every Wednesday at noon, I would give a tour to English-speaking visitors to Notre Dame. The windows, especially the North Rose Window, are of enormous significance for me. Notre Dame is simply one of the most spiritually charged places in the world. Please pray to Notre Dame, Our Lady, that the damage might be contained.  I was just interviewed by NBC about the Cathedral fire.

“We also pray that our Lord will bring comfort and peace to Archbishop Michael Aupetit as well as our brothers & sisters in the @dioceseparis, & the people of France at this time,” the Archdiocese of Philadelphia tweeted.