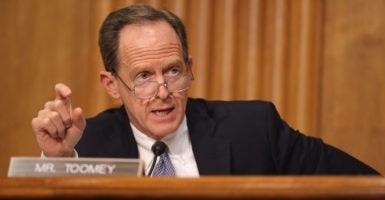 Until now, every major proposal to make the 2017 tax cuts permanent has neglected to address the expiration of the most pro-growth piece of the reform: full and immediate expensing.

Full expensing fixes a damaging quirk in the U.S. tax code that raises the cost of investing in America and thus makes it harder to create jobs, increase productivity, and raise wages.

The Tax Cuts and Jobs Act made it easier to invest by lowering the corporate tax rate and letting businesses deduct spending on important investments such as equipment and tools in the same way they currently deduct their spending on employee wages, advertising costs, and rent.

The permanent rate cut received most of the media attention, but the investment rules are equally important, and they’re only temporary. The 2017 law allows 100% expensing for five years, through 2022, then phases it out over the next five years.

Tax reform is about more than just lowering rates. Structural reforms, such as expensing, are a crucial part of updating the tax code and can provide the strongest economic boosts. Erica York of the Tax Foundation says, “in the long run, permanent 100 percent [expensing] produces about 4.5 times more GDP [gross domestic product] growth per dollar of revenue than making individual TCJA provisions permanent.”

It also is important to keep individual taxes low, but neglecting to extend expensing, the most pro-growth part of the 2017 tax cuts, is a form of economic malpractice. The ALIGN Act remedies the mistakes of past attempts to make aspects of the Tax Cuts and Jobs Act permanent.

Expensing is not just a business tax cut; it is fundamentally pro-worker.

Expensing lowers the tax costs of new investments, which allows businesses to expand and upgrade their facilities and equipment, which leads to more jobs, better technology, and gains in productivity, all of which boosts wages.

American workers now benefit from better than 3% wage growth on average, with even faster gains for lower-income workers. For this good news to continue, business investment must regain its ground following historically high trade uncertainty, tariffs, and other headwinds. Without permanent expensing, investment in American workers will be less attractive.

Expensing has bipartisan support. Testifying at a recent House hearing on the 2017 corporate tax reform, Jason Furman, an economic adviser under President Barack Obama, was critical of the overall tax reform but described full business expensing as the first element of his alternative tax proposal.

The proposal from Toomey is the much-needed companion piece to the various Republican plans for tax reform 2.0. Making all the provisions of the 2017 tax cuts permanent, including expensing, would increase the projected growth from the original, temporary reform by about 60%.

Addressing the growing fiscal crisis through spending reforms will also be a crucial part of allowing taxes to stay low for future generations.

Making expensing permanent is a necessary fix to help American workers, who rely on the world’s best technology and tools to compete with a global workforce.