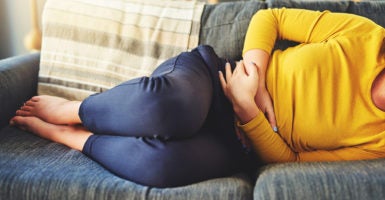 "I’m not female and I menstruate. Many trans and intersex people are in this position and feel alienated from menstrual health access," a Twitter user complained recently. (Photo: Getty Images)

A queer Twitter user targeted Fitbit’s “female health” tracker for alienating transgender and intersex users in a Saturday tweet, saying, “I’m not female and I menstruate.”

“Hey @FitbitSupport,” the user tweeted Saturday. “I love the ‘Female Health’ tracker in your app. However, I’m not female & I menstruate. Many trans & intersex people are in this position and feel alienated from menstrual health access. Could you please change the name to the neutral term ‘Menstrual Health’?”

“It’s a tiny change they could make that will make a huge difference to a lot of people,” Lilo the Autistic Queer added. “I don’t want to have to misgender myself and my body in order to access menstrual health tools.”

The user also tweeted a picture of what the Fitbit health tracker looks like, showing the category “Female health.”

Lilo the Autistic Queer encouraged other users to both retweet the criticism of Fitbit and tweet their own thoughts about “something you want people to understand about your experiences with menstruation” using the hashtag #MyHealthMyFight.

Fitbit did not respond to a request for comment from The Daily Caller News Foundation.