Once Again, Big Businesses Side With LGBT Activists 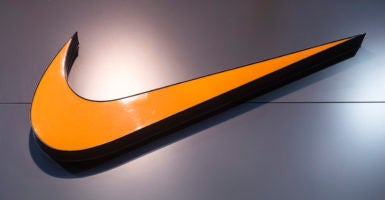 Nike "isn't doing itself any favors by signing a letter telling Christians to get out of the child care business," Tony Perkins writes. (Photo: Budrul Chukrut/SOPA Images/LightRocket via Getty Images)

Nike loves selling kids’ shoes—it just doesn’t care if they have a home to wear them in. That’s the amazing revelation from a new campaign against Tennessee adoption.

The sports giant, which is still on a lot of Americans’ you-know-what list after dissing the national anthem, isn’t doing itself any favors by signing a letter telling Christians to get out of the child care business.

In a letter that was also signed by corporate titans Amazon, Dell, Mars, IKEA, Hilton, Marriott, and others, a collection of national CEOs warned the state that letting faith groups keep their adoption and foster care offices open is somehow a threat to the economy.

“We believe Tennessee’s continued growth and innovation rely on the state being open and welcoming to everyone,” the coalition’s letter stated. “The recent passage of HB 836 sends the opposite message … [and puts] put our collective economic success at risk.”

No one knows quite how, since the law that Gov. Bill Lee signed actually makes it possible for the state to place more children in loving homes, not less. How, exactly, is that bad for business?

According to these companies, it’s not fair to the LGBTQ community. But obviously, no one at these multimillion-dollar businesses bothered to actually read the law, since the only thing it does is give religious social services the freedom to keep placing kids as they see fit. Not one sentence of the policy makes it harder for anyone to adopt.

The same avenues that were available to people before are available now. The only difference is, faith-based groups won’t have to choose between placing kids with same-sex couples or shutting down.

If anything, Lee’s stance is in complete agreement with these companies: Tennessee should be inclusive. That’s why he’s giving every organization a right to participate in the system.

But then, these businesses were never interested in real equality. Instead, they’ve become cultural bullies, co-opted by LGBTQ activists who want to force true diversity out of the marketplace and make it an arena where only people who conform to their radical ideas about gender and sexuality are welcome. It’s hypocrisy, plain and simple.

Speaking of big business hypocrisy, these same companies have no problem climbing down from their moral high horse to partner with China—one of the most unwelcoming and repressive societies around.

In fact, they’re so unconflicted that some of them have joined in the effort to track down and profile religious minorities (a problem I talked about in my capacity as chairman of the U.S. Commission on International Religious Freedom during a speech at the U.S. Agency for International Development).

If Nike, Amazon, Dell, and the rest of these businesses are so concerned about “targeting” people, maybe they need to take a long look in the mirror and ask themselves how they can rationalize profiting off of violent and inhumane regimes. Until then, no American—not in Tennessee or the rest of this country—can possibly take their moral crusading seriously.