Pelosi Omits Christians as She Lists Religious Persecutions Around World 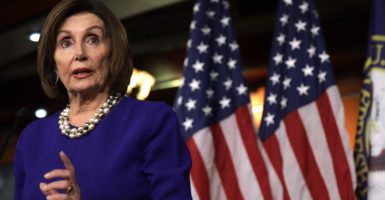 The House speaker spoke Thursday morning in Washington, D.C., at the National Prayer Breakfast where she prayed for those who are persecuted because of their religion. She listed people of Buddhist, Muslim, and Jewish faiths before generalizing about other persecuted religions.

“Oh, Lord, we thank all gathered at this prayer breakfast for lifting our voices for the poor and the persecuted, the millions who are missing or murdered because of their faith,” Pelosi, who is a Catholic, prayed.

“Let us pray for the Panchen Lama and all the Tibetan Buddhists imprisoned in China or missing for following their faith,” she said. Pelosi also prayed for the “1 to 3 million Uighurs in China forced from their homes and incarcerated in camps” and for “Raif Badawi in Saudi Arabia and for all the writers and religious free thinkers imprisoned for speaking their minds.”

The House speaker also prayed for “priests, rabbis, pastors, and religious leaders around the world whose freedoms have been stolen because of what they believe,” for victims of anti-Semitism, and for the “countless Muslims and other religious minorities, often unseen and unnamed, who have been abducted, oppressed, and abused because of who they are and what they believe, their faith.”

Pelosi failed to specifically mention Christians during her prayer, though Christians are severely persecuted around the world for their beliefs.

Over 245 million Christians lived in places where they endured serious religious persecution between Nov. 1, 2017, and Oct. 31, 2018, according to Open Doors USA, an organization that aids persecuted Christians worldwide.

The organization also found that during this same time period, 4,305 Christians were killed for their faith, 1,847 churches and Christian buildings were attacked, and 3,150 believers were detained without trial, arrested, sentenced, or imprisoned.

Aid to the Church in Need, a Catholic charity that administers to persecuted Christians, reports that “almost 300 million Christians around the world—or 1 out of every 7—live in a country where they suffer some form of persecution, such as arbitrary arrest, violence, a full range of human rights violations, and even murder.”

A 2019 report ordered by former British Foreign Secretary Jeremy Hunt found that Christians were the most persecuted group in the world and that the persecution of Christians has reached near “genocide” levels. Christianity faces being “wiped out” from certain parts of the Middle East, the report found.

Pro-life activist Obianuju Ekeocha tweeted Thursday morning that severe persecution of Christians continues in Nigeria where Christians are slaughtered for their beliefs.

Pelosi closed by praying that Americans “never become immune to atrocities that continue to challenge the collective conscience of our shared humanity.”

For us today, people of faith, leaders, lawmakers, and activists who can mobilize the public, we pray that the moral clarity of faith moves us to demand justice for those who are suffering, and we pray that commercial interests never blind us to the ongoing human right struggle fought by so many throughout the world. Let us raise our voices in prayer as one in the struggle for freedom in the name of the Father, the Son, and the Holy Ghost.

Pelosi did not respond to The Daily Caller News Foundation’s request for comment.