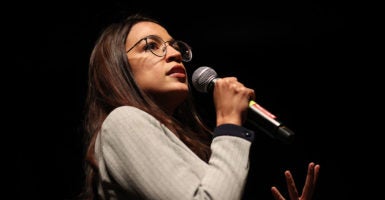 "Him pretending to be surprised was such a joke,” Rep. Alexandria Ocasio-Cortez, D-N.Y., says of Rush Limbaugh's reaction to receiving the Presidential Medal of Freedom. Pictured: Ocasio-Cortez speaks at a campaign event for Sen. Bernie Sanders, I-Vt., Jan. 25, 2020, in Ames, Iowa. (Photo: Win McNamee/Getty Images)

Limbaugh, who announced Monday that he has advanced-stage lung cancer, grew visibly emotional while receiving the award during Trump’s address. Ocasio-Cortez accused him of faking it.

“Rush Limbaugh is a virulent racist,” she said in an Instagram video Tuesday night.

“But even just on top of that, to do it in the middle of the State of the Union and not even dignify it with its own ceremony as it has, there’s all sorts of norms that are being violated and not just for people’s humanity but also it truly just cheapens the value of it,” she added.

“Also, him pretending to be surprised was such a joke,” she continued.

“This has been news all day, there have been multiple reports from multiple outlets, saying that Rush limbaugh was going to receive the Medal of Freedom, and then Trump announced it and he had to pretend like this was some kind of Oprah moment,” Ocasio-Cortez said.

Says that he, while having cancer, was a “joke,” needed an “Opera moment,” and was “nauseating” pic.twitter.com/VrsIj1Cmlj