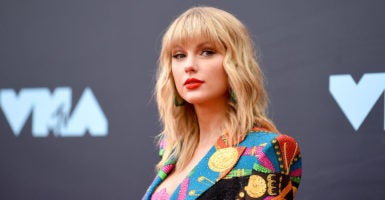 “I’ve educated myself now, and it’s time to take the masking tape off my mouth,” says Taylor Swift, pictured at the 2019 MTV Video Music Awards, in her new Netflix documentary. (Photo: Jamie McCarthy/Getty Images for MTV)

As the title suggests, it begins by telling the story of a small-town girl making it big in the world.

With never-before-seen moments and video clips from her early days as a charming country music artist, the film opens by reminding us how Swift was uniquely able to relate to an entire generation of young girls who one day dreamed of being told, “I talked to your dad, go pick out a white dress.”

Whether you like her albums or not (I’ll keep my music review of her last two synthesized pop albums to myself), watching the documentary, you can’t help but root for Swift on her journey from an innocent country singer to an independent, best-selling, pop music legend.

But halfway through the inspiring story, the documentary takes an all-too-predictable turn. Our beloved Taylor swaps her cowgirl boots for a new urban chic identity, clothes, and friends.

Then, boarding a private jet from New York City, “Miss Americana” lands back in Tennessee, where she reveals her newfound “obsession” with liberal political views.

“I’ve educated myself now, and it’s time to take the masking tape off my mouth,” Swift says. “Like, forever.”

From there, the film turns into a calculated political hit job against Marsha Blackburn, the formidable conservative senator from Swift’s home state.

“[Marsha Blackburn] votes against fair pay for women,” Swift says, on the verge of tears so the audience knows how genuine she is.

[Blackburn] votes against reauthorization of the Violence Against Women Act, which is just basically protecting us from domestic abuse and stalking. Stalking! She thinks if you’re a gay couple, or even if you look like a gay couple, you should be allowed to be kicked out of a restaurant. It’s really basic human rights and it’s right and wrong at this point. And I can’t see another commercial and see [Blackburn] disguising these policies behind the words ‘Tennessee Christian values.’ I live in Tennessee. I’m Christian. That’s not what we stand for.

It would take days to debunk everything Swift got wrong in this single statement. (Some have already begun.) But it’s safe to say Blackburn supports equal pay for women, she fights to protect them from violence and stalking (stalking!), and certainly, Blackburn doesn’t think gay couples should be allowed to be kicked out of restaurants for the crime of being gay.

Of course, these issues involve complex legislation, litigation, and yes, personal feelings. Swift grazes over all that. Instead, she sends the message to her 126 million fans that this is what the new, modern “Miss Americana” looks like, and if you’re not with her, you’re one of them:

Then, Swift reveals what she thinks of these people, referring to Blackburn, President Donald Trump, and their conservative supporters as “racists,” “homophobes,” and even “fascists.”

As a woman who built her entire career with the magic of her songwriting pen, this language is disappointing and astonishingly lazy. Indeed, there is nothing “Americana” about imputing such ill intentions to people she doesn’t know, and cheapening such historically important terms.

Miss Americana has always symbolized the best of American values—the ability to think, act, and believe for oneself. She is respectful and sweet, but fearless in speaking out. Miss Americana has no need to spread misinformation and half-truths, because she knows the arguments from both sides. She reserves name-calling for those who can’t argue on merit.

Miss Americana doesn’t demonize her opponents, because she has the courage to take them on in debate. She values diversity, but not in the superficial, rainbow kind of way. Instead, Miss Americana appreciates that diversity reaches beyond gender and skin color, and means accepting people for their differing opinions, too.

Above all, Miss Americana refuses to take her freedoms for granted, because she knows how quickly they could be taken away.

As conservatives, it’s tempting to be offended by Swift’s depiction of us and to mock her newfound, often ignorant “woke” views. But instead of responding this way, we should have sympathy and realize that somewhere along the way, Swift misunderstood an important message.

In “Miss Americana,” Swift explains that as a country singer, she was taught to keep quiet.

“Part of the fabric of being a country artist is, don’t force your politics on people,” she said. “Let people live their lives. That is grilled into us.”

This message is exactly right: No one should force their politics on people—Swift, or anyone else. But here, Swift overlooks a crucial point: There’s a difference between forcing your beliefs on people and standing up for what you think.

Conservatives should encourage every young girl in America to use her voice—even those with whom we disagree. However, we must teach them that doing so is both a burden and responsibility.

It’s a burden in the sense that once you speak out, you will be asked to defend yourself, as you should. It’s a responsibility in the sense that if you want to engage, you have an obligation to do it from a place of honesty and good faith.

For Swift, who has so many young, impressionable fans, these burdens and responsibilities especially hold true.

Spreading misinformation and half-truths about her opponents, and depicting them in racist, ignorant ways might be what Swift sees happening on TV, but it’s not the Miss Americana way. Posting her political opinions on Instagram and disabling comments (as she did in advocating the so-called Equality Act) quite literally shuts down conversation and sends the message, “I know better than you.”

Perhaps not surprisingly, not once during “Miss Americana” did Swift engage with anyone who disagrees. Instead, she relied on conveniently edited Fox News clips to portray the other side.

Hopefully by now, many of Swift’s followers are old enough to see this for the one-sided propaganda that it is. But with so many fans, Swift undoubtedly has a sway.

At the end of the documentary, Swift tells us she’s “ready for combat.” But what if instead of combat, we started with a conversation?

Surely, that’s what Miss Americana would do.