Business Owner Blasts Living Wage Protest: ‘This Is Only About the Union Padding Their Bottom Line’ 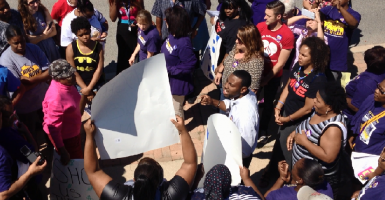 WAUWATOSA, Wis.—Sally Sprenger, owner of Supportive Homecare Options, shook her head last week as she watched about 75 people participate in a Service Employees International Union-organized protest near her firm’s headquarters.

Seeing only two of her company’s nearly 1,200 employees taking part in the rally told her all she needed to know about SEIU’s motives.

“My employees are not interested in this,” Sprenger said as she stood across the street from the demonstration. “This is only about the union padding their bottom line.”

But politicians and labor organizers were feeding the picketers much different information.

But Supportive Healthcare Options, which has a contract with the Milwaukee County Department of Family Care, doesn’t get any say on the minimum wage of its employees. The agency sets the wage, which was $10.27 for this year—more than $3 higher than the state minimum wage.

Only two of a company’s 1,200 employees showed up at a union protest.

And when Sprenger entered the crowd to try to explain that she already signed off on her employees making the mandated Milwaukee County “living wage” of $11.32 an hour, she was essentially turned away from speaking.

Some demonstrators called Sprenger a union buster and told her she should be ashamed of herself. Another protester asked, “How do you sleep at night?”

Milwaukee County Supervisor Deanna Alexander, who has called out SEIU for using Bowen to request an audit of Supportive Homecare Options, also was at the rally handing out flyers with details about the living wage and union negotiations she says SEIU is not openly discussing.

Milwaukee County’s living wage law, which was written by Bowen with help from SEIU-affiliated officials, includes a provision that exempts county-contracted companies from paying the living wage if the employer agrees to a contract with a labor union.

Sprenger said she was told by SEIU Healthcare Wisconsin Staff Director Bonnie Strauss in December, when collective-bargaining negotiations began, that she wouldn’t have to provide the living wage if she forced all her staff to become dues-paying union members. That would mean $300,000 in additional yearly revenue for SEIU, according to Sprenger.