Free to Succeed: A Brief History of School Choice 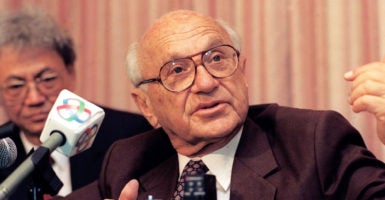 Jack Rosenwinkel is a member of the Young Leaders Program at The Heritage Foundation.

Perhaps it’s the title, but at first glance, Milton Friedman’s 1955 essay, “The Role of Government in Education,” seems unassuming. To many Americans, the role of government in education is self-evident and impregnable. So, given public schools are run by the government, an essay on the government’s role in education seems like it would be both obvious (and boring).

In reality, Friedman’s argument was neither obvious nor boring. In “The Role of Government in Education,” Friedman argued that basic free-market principles—such as competition and consumer freedom—should be reintroduced into the education marketplace.

Friedman’s argument was not necessarily new or radical. For the first eight decades after the American Revolution, parents were the primary drivers of what and how their children learned. According to Market Education, written by the late Andrew Coulson, this “unofficial school choice” later dissolved amidst burgeoning anti-Catholic immigrant sentiment and a massive push for mandatory, state-funded, public education.

By the time Friedman wrote “The Role of Government in Education,” state governments essentially had developed monopolies on education, with children assigned to public schools within the district boundaries where they lived. This iron triangle of public schooling—government administration, compulsion and financing of education—had weakened important market forces and limited parents’ power to control their children’s education. Private schools offered an alternative to public school system, but many low- and middle-income families could not afford to pay both the taxes that support public schools and the tuition required of private schools.

So although the history of American education reflects aspects of school choice, education freedom had nearly disappeared by 1955. Children attended their neighborhood public schools even if those schools were a poor fit.

Friedman’s essay argued that parents, not the state, should makes the decisions when it came to their children’s education. Instead of government officials mandating students attend given schools, competition between schools would encourage greater innovation, efficiency, and effectiveness. Parents, untethered from arbitrary school district boundaries, then could vote with their feet. As Friedman put it: “Parents could express their views about schools directly, by withdrawing their children from one school and sending them to another, to a much greater extent than is now possible.”

Friedman’s essay also proposed a voucher program, where the state would take the money that wouldhave been spent to educate students at public schools and give it to parents to cover tuition at a private school of their choice. Fundamentally, he argued to separate the financing of education from the delivery of services.

Education savings accounts allow parents to use taxpayer funds to pay for tuition, tutors, textbooks, and other education expenses. Friedman had suggested this as well during a 2003 interviewin which he spoke of issuing “partial vouchers.”

Florida, Tennessee, Mississippi, and North Carolina have since followed Arizona’s lead and implemented their own Education Savings Account options.

Despite these gains, pushback continues. Just last week, the U.S. Supreme Court heard a case that dealt with tax-credit scholarship programs. The case’s ruling, which is expected this summer, could shape the future of the school choice discussion in the United States.

But Friedman’s legacy endures, and this year’s National School Choice Week is a reminder that progress continues, but by no means is the fight for authentic education freedom over yet.