A Mistake Imperils the Privacy of Parents Who Back School Choice 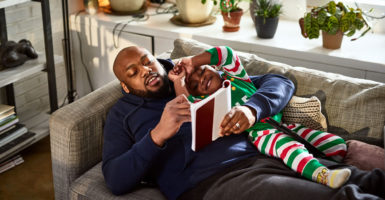 News of a disturbing data dump comes during National School Choice Week, the annual celebration of parents’ right to choose the best learning options for their children. (Photo: Stock/Getty Images)

Christy Cook hasn’t been singled out or harassed for the choices she makes for her son’s education. She’d like to keep it that way.

Yet in an astounding administrative error, Arizona’s Department of Education put Cook’s family and thousands of others at risk by disclosing their personally identifiable information to a special interest group opposed to parental choice in education.

The state attorney general’s office is reviewing the incident to determine whether the agency violated federal law.

The Arizona Department of Education released identifying information for children using education savings accounts, which are flexible spending accounts that allow K-12 students and their parents to decide how and where they will learn instead of attending an assigned school based on a child’s Zip code.

Some 7,000 Arizona children use the accounts today, and approximately half of them have special needs, as does Cook’s son, Trevor.

To make matters worse, the state Department of Education released the information to Save Our Schools (SOS) Arizona, a group backed by the state teachers union that has campaigned against the education savings accounts. In 2018, SOS Arizona led an effort to limit the number of children who could use the accounts statewide.

Ironically, news of the data dump comes during National School Choice Week, the annual celebration of parents’ right to choose the best learning options for their children.

“I’ve been involved with the ESA program since the beginning,” Cook said in an interview with me.

Like any parent, she said, she always has concerns about her son’s safety.

“Given that the SOS [Arizona] is a large group and very vocal and has your name and email address, it opens up anything. You feel like you are a little bit more exposed,” Cook said.

“Just knowing that it’s out there with the ESA data breach makes me sick to my stomach and feeling like I need to look over my shoulder at all times,” parent Tonya Reiner told me in an interview.

Arizona families with education savings account were the target of another attempt by special interest groups to block account use, in addition to SOS Arizona’s efforts.

Nearly a decade ago, the state teachers union filed a lawsuit to take the accounts away from children with special needs, but the Arizona Supreme Court ruled in favor of families three years later.

Arizona lawmakers made their state the first to enact the education savings accounts for eligible families in 2011. The state deposits a portion of a child’s funds under the state education spending formula into a private account that parents use to buy education products and services for their children.

The accounts changed the way families and policymakers around the country consider the future of education. Lawmakers in four other states–Florida, Mississippi, North Carolina, and Tennessee–used Arizona’s design to create similar customized education savings accounts for families in their states.

Lawmakers in dozens of other states, including West Virginia, Oklahoma and South Carolina, have considered the accounts in recent years.

To the credit of the Arizona Department of Education, the agency recently outsourced some account management responsibilities to a private company that specializes in payment processing services such as those used by education savings account holders. Currently, private organizations operate the accounts in Florida and North Carolina.

After this latest mistake, Arizona education officials should expedite the process of turning over account management responsibilities to someone else.

In 2016 and 2017, the Goldwater Institute, an Arizona-based research and litigation organization, and The Heritage Foundation, respectively, produced reports explaining how education savings accounts can be managed by private companies that already handle similar accounts.

The Arizona Department of Education’s mistake jeopardizes students’ safety. If the agency violated federal law, other state officials should respond accordingly and hold the department accountable.

Meanwhile, Arizona education officials should act immediately to turn over responsibility for education savings accounts to someone else.