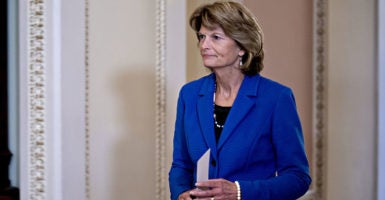 In the lead-up to the Senate vote not to call witnesses in the impeachment trial of President Donald Trump, another John Bolton bombshell dropped, Sen. Lisa Murkowski of Alaska rendered the debate moot, and the Senate chaplain almost stole the show.

About 5:40 p.m. Friday, the Senate voted 51-49 against calling witnesses, meaning the inevitable vote to acquit Trump on two articles of impeachment will come soon. How soon is uncertain, but the final vote likely will be Wednesday.

Sens. Mitt Romney, R-Utah, and Susan Collins, R-Maine, joined all Democrats and two Independents in voting for new witnesses as Democrats sought to convict and remove Trump from office nine months before the presidential election.

The House impeached Trump on Dec. 18, alleging abuse of power and obstruction of Congress and accusing Trump of tying military assistance to Ukraine to its agreement to investigate interference by the former Soviet republic in the 2016 U.S. election and the dealings there of former Vice President Joe Biden and his son, Hunter Biden.

After the vote against calling new witnesses, senators went on to confer about finishing the Senate trial by Wednesday, which would be after Trump delivers his State of the Union address Tuesday night.

Senate Majority Leader Mitch McConnell, R-Ky., noted the House had numerous witnesses and 28,000-plus pages of documents already in evidence, which he said is enough for a Senate trial.

“There is no need for the Senate to reopen the investigation, which the House Democratic majority chose to conclude and which the [House impeachment] managers themselves continue to describe as ‘overwhelming’ and ‘beyond any doubt,’” McConnell said in a formal statement.

“Never in Senate history has this body paused an impeachment trial to pursue additional witnesses with unresolved questions of executive privilege that would require protracted litigation,” McConnell said. “We have no interest in establishing such a new precedent, particularly for individuals whom the House expressly chose not to pursue.”

Here are highlights from the day on which the Senate heard arguments over calling witnesses.

Murkowski, an Alaska Republican, was among four Republicans considering voting to call witnesses, particularly after The New York Times reported Sunday that a forthcoming book by Bolton, Trump’s former national security adviser, says Trump told Bolton that he sought to have the Ukraine government get information on Democrats.

To call new witnesses in addition to the 17 who testified in the House impeachment proceedings, it would have taken four Republicans to join the 47 senators in the Democrats’ caucus.

Romney announced that he would vote to hear new witnesses, after Collins already had done so.

Sen. Lamar Alexander, R-Tenn., had announced late Thursday that he would vote against calling witnesses, saying: “The Constitution does not give the Senate the power to remove the president from office and ban him from this year’s ballot simply for actions that are inappropriate.”

Alexander’s announcement signaled that Democrats would not be able to gain a majority for witnesses.

However, House Democrat managers argued that Chief Justice John Roberts could break a tie, based on precedent from the 1868 Senate trial of President Andrew Johnson.

Just before 2 p.m., ending speculation about a tie, Murkowski announced on Twitter and in a formal statement that she would not vote for witnesses. She explained her reasons in a thread of five tweets in which she concluded that “the Congress has failed.”

The Senate chaplain, Barry Black, who has opened each day of the trial with a prayer, made news with a prayer Friday that spurred media and social media speculation that Black was pushing senators for witnesses or a specific outcome.

“Remind our senators that they alone are accountable to you for their conduct,” Black said in the prayer. “Lord, help them to remember that they can’t ignore you and get away with it. For we always reap what we sow.”

The Baltimore native was commissioned as a Navy chaplain in 1976. His first duty station was the Fleet Religious Support Activity in Norfolk, Virginia.

Before the Senate debate on witnesses, The New York Times dropped another big story about Bolton, who Democrats wanted to call as a witness. Bolton, the former U.N. ambassador who resigned last year as Trump’s national security adviser, has a book coming out in March.

Rep. Adam Schiff, D-Calif., leader of the seven House impeachment managers, read parts of the Times article on the Senate floor. Later, excerpts were shown on a large screen.

“Today,” Schiff said, “we were greeted to yet another development in the case when The New York Times reported with a headline that says,  ‘Trump told Bolton to help his Ukraine pressure campaign, book says.’”

“According to The New York Times, more than two months before he asked Ukraine’s president to investigate, President Trump directed John R. Bolton, then his national security adviser, to help with his pressure campaign to extract damaging information on Democrats from Ukrainian officials, according to an unpublished manuscript by Mr. Bolton.,” Schiff said, reading from the Times.

Cipollone leads the president’s defense team at the Senate trial.

“You will recall Mr. Cipollone suggesting that the House managers were concealing facts from this body. He said all the facts should come out,” Schiff said. “Well, there is a new fact, which indicates that Mr. Cipollone was among those in the loop. Yet another reason why we ought to hear from witnesses.”

House manager Rep. Jason Crow, D-Colo., warned senators about the judgment of history, since all the facts will come out sooner or later.

Rep. Sylvia Garcia, D-Texas, argued that if Trump really is innocent, he would want witnesses:

If the president is telling the truth, and he did nothing wrong, and the evidence would prove that, then we all know he would be an enthusiastic supporter for subpoenas. He would be here probably himself if he could, urging you to do subpoenas if he had information proving he was totally not in the wrong. If he is innocent, he should have nothing to hide.

Trump lawyer Jay Sekulow later countered that the House prosecution team seems to suggest the president must prove his innocence, which is not how the system works.

“You’re not going to have a witness wand here, where we say, OK, you’ve got a week to do this and get it done,” Sekulow said. “There is no way that would be proper under due process.”

Sekulow noted that the House had 17 witnesses, 13 of whom testified in public. Further, he said, 192 video clips were shown from that public witness testimony during the course of the Senate trial.

Only the House took testimony. Sekulow said that for a fair trial, the president’s legal team would have the right to cross-examine each witness:

Sekulow added that the House Intelligence Committee, which Schiff chairs, opted not to subpoena Bolton, fearing it would delay a House impeachment vote into the new year.

Sekulow appealed to the Senate, saying it wasn’t their job to clean up after the House’s lack of a thorough investigation.

“How many constitutional challenges will we have in this body because they placed a burden on you that they wouldn’t take themselves in putting their case forward?” Sekulow said.

Other coverage of the impeachment trial for The Daily Signal by White House correspondent Fred Lucas includes:

7 Questions and Answers From Day 9 of Trump Impeachment Trial