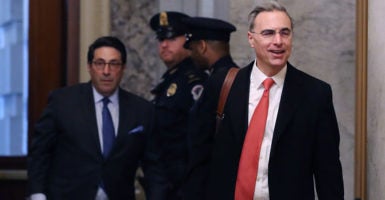 President Donald Trump’s lawyers briskly completed final arguments against removing their client from office Tuesday, taking a fraction of the 24 hours allotted to them in the Senate impeachment trial.

The Democrats logged three marathon days in the Senate, arguing for more than 21 hours in all for Trump’s ouster for abusing his power and obstructing Congress in connection with a July 25 phone conversation with Ukrainian President Volodymyr Zelenskyy.

Next, senators will be able to submit questions in writing for the prosecution and defense teams to answer for up to eight hours Wednesday and Thursday.

Here are highlights of the Trump team’s closing arguments.

During their phone conversation in July, Trump and Zelenskyy briefly discussed Trump’s interest in Ukraine’s investigating the dealings there of former Vice President Joe Biden and his son Hunter Biden.

The younger Biden joined the board of Burisma, a Ukrainian energy firm, while his father was President Barack Obama’s point man on Ukraine policy.

Trump also told Zelenskyy that he would like Ukraine to investigate whether that nation interfered in the 2016 U.S. presidential election.

At the time, Ukraine’s president didn’t know that Trump had put a hold on $391 million in military aid, which he would release in September.

The book, The New York Times and others reported, will say that Trump told Bolton he put a hold on the military aid to Ukraine because he wanted the former Soviet republic to investigate the Bidens.

“You cannot impeach a president on unsourced allegations,” Sekulow said.

He cited another of Trump’s lawyers, Harvard law professor Alan Dershowitz, who said the night before that even if true, the incident did not rise to the level of impeachment.

“I want to be clear on this, because there is a lot of speculation out there,” Sekulow said. “With regard to what John Bolton has said … here’s what the president said, in response to that New York Times piece: ‘I never told John Bolton that the aid to Ukraine was tied to investigations into Democrats, including the Bidens.’”

“What we are involved in here as we conclude is the most solemn of duties under our constitutional framework: the trial of the leader of the free world and the duly elected president of the United States. It is not a game of leaks and unsourced manuscripts,” Sekulow said.

“Hamilton put impeachment in the hands of this body, the Senate, precisely and specifically to be above that fray,” he said. “This is the greatest deliberative body on Earth.”

White House counsel Pat Cipollone gave the last argument, in which he made the case against continuing the trial with witnesses.

Cipollone called on senators to end what another Trump lawyer had called the “era of impeachment” on Monday.

“The Senate cannot allow this to happen,” the White House counsel said, adding: “This should end now, as quickly as possible. Reject these articles of impeachment for our country and for the American people.”

Sekulow argued that impeaching and removing a president through two articles of impeachment that do not allege a crime is a dangerous path to establish for future presidents.

Sekulow said future presidents could be “paralyzed from their first day in office” if the Senate allows the impeachment standard for Trump to stand.

“To lower the bar of impeachment based on these articles of impeachment would impact the functioning of our constitutional republic and the framework of that Constitution for generations,” he said.

Specifically, Sekulow said, this could intrude on a president’s foreign policy by giving the legislative branch veto power if lawmakers question a president’s intentions:

The claim that foreign policy decisions can be deemed abuses of power—based on subjective opinions about mixed or sole motives that the president was interested only in helping himself–demonstrates the dangers of employing the vague, subjective, and politically malleable phrase ‘abuse of power’ as a constitutionally permissible criteria for the removal of a president.

4. Elections and the Executive Branch

Sekulow stressed that elections are supposed to determine the next president.

There are some of you in this chamber right now that would rather be someplace else. That’s why we’ll be brief. Why would you rather be somewhere else? Because you’re running for the nomination of your party. I get it. But this is a serious deliberative situation.

“For two centuries, the president has been regarded as the sole organ of the nation in foreign affairs. So the idea that we are going to find out when the president had the wrong subjective motives by comparing what he did to the recommendations of some interagency consensus among staffers is fundamentally anti-constitutional,” Philbin told the senators.

The House Intelligence Committee’s impeachment report to the House Judiciary Committee criticized Trump for acting in his own interest when he did not follow the recommendations of foreign policy advisers regarding his conversation with Zelenskyy.

“It inverts the constitutional structure. It’s also fundamentally anti-democratic because our system is rather unique in the amount of power that it gives to the president,” Philbin said, adding:

There is no democratic legitimacy or accountability to their decisions or recommendations. That is why the president is the head of the executive branch. That is why he has the authority to actually set policy and make determinations regardless of what the staffers may recommend.

Other coverage of the impeachment trial for The Daily Signal by White House correspondent Fred Lucas: