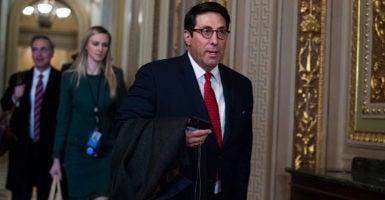 President Donald Trump’s lawyers took the Senate floor Saturday morning to open their defense in his impeachment trial, wrapping up their initial arguments within two hours.

The defense’s opening presentation was unusually brief after House Democrats’ impeachment managers stretched their arguments for about eight hours on each of three days.

Trump’s lawyers have Monday and Tuesday to finish their defense, as each side gets three days and up to 24 hours to make their cases to senators. The House’s seven impeachment managers, urging the Senate to remove Trump from office, used all but about three hours of their allotted time.

Trump weighed in on Twitter well after the Senate adjourned shortly after noon.

Here are five highlights from the opening arguments of the president’s lawyers.

1. ‘Massive Interference in an Election’

The Democrat-controlled House voted Dec. 18 to impeach Trump, alleging he abused his power and obstructed Congress in connection with his July 25 phone call to Ukrainian President Volodymyr Zelenskyy.

In the call, the two men briefly discussed Trump’s interest in Zelenskyy’s investigating possible Ukrainian interference in the U.S. presidential election in 2016 as well as Ukrainian-related actions taken by former Vice President Joe Biden and his son, Hunter Biden.

House Democrats allege that Trump used the power of his office to solicit Ukraine to interfere in the U.S. presidential election in 2020.

White House counsel Pat Cipollone countered that it is Democrats’ impeachment effort that seeks to “perpetrate the most massive interference in an election in American history.”

“They’re asking you to remove President Trump from the ballot,” Cipollone said.

If two-thirds of the Senate, or 67 senators, vote to remove a president from office, they also may disqualify him from holding another federal office.

The White House counsel pointed to the official transcript of the Trump-Zelenskyy call, ordered released by the president, which shows that both leaders talked about “burden-sharing” in support of Ukraine by other European countries.

Cipollone said of the House managers:

They come here to the Senate and they ask you [to] remove a president, tear up the ballots in all of your states, and they don’t bother to read the key evidence of the discussion of burden-sharing that’s in the call itself. Now, that’s emblematic of their entire presentation.

They have the burden of proof. And they have not come close to meeting it.

In 2016, Biden, as vice president, threatened to withhold $1 billion in U.S. aid from Ukraine unless the Eastern European nation fired Viktor Shokin, the state prosecutor who was investigating the Ukrainian energy company Burisma Holdings.

Hunter Biden, the vice president’s son, held a high-paying job on the board of Burisma at the same time his father was the Obama administration’s point man for Ukraine policy.

In his July 25 phone call with Zelenskyy, Trump said he would appreciate Ukraine’s investigating the matter along with Ukraine’s possible meddling in the 2016 U.S. election.

At the time, unknown to Zelenskyy, Trump had put a hold on $391 million in congressionally approved military aid to the former Soviet republic to counter Russian aggression, which he would lift in September.

First, the transcript shows that the president did not condition either security assistance or a meeting on anything. Second, President Zelenskyy and other Ukrainian officials repeatedly have said there was no quid pro quo and no pressure on them to review anything.

Third, President Zelenskyy and high-ranking Ukrainian officials did not even know the security assistance was paused until the end of August, over a month after the July 25 call.

Fourth, not a single witness testified that the president himself [Trump] said that there was any connection between any investigations in security assistance, a presidential meeting, or anything else.

Fifth, the security assistance flowed on Sept. 11 and a presidential meeting took place on Sept. 25 [at the United Nations] without the Ukrainian government announcing any investigations.

Finally, the Democrats’ blind drive to impeach the president does not and cannot change the fact, as attested to by the Democrats’ own witnesses, that President Trump has been a better friend and stronger supporter of Ukraine than his predecessor.

On the last point, numerous witnesses who testified at the House impeachment hearings made clear that they supported the Trump administration’s policy of providing lethal weapons to Ukraine to defend itself from Russia.

President Barack Obama’s administration had refused to provide such weaponry.

3. ‘Claiming to Be Mind Readers’

Zelenskyy and his aides in Ukraine have said on several occasions that they did not believe the U.S. was pressuring them to begin investigations of Burisma and possible Ukrainian meddling in the 2016 U.S. election, which the president’s lawyers were eager to note.

“Of course, the best evidence that there was no pressure or quid pro quo is the statements of Ukrainians themselves,” Purpura told senators. “The fact that President Zelenskyy himself felt no pressure on the call and did not perceive there to be any connection between security assistance and investigations would, in any ordinary case in any court, be totally fatal to the prosecution.”

“The judge would throw it out,” he said. “The case would be over. What more do you need to know?”

During their arguments, House members had told senators that, because of a power disparity, it was highly unlikely that Zelensky would challenge an assertion by Trump.

“How do they try to overcome the direct words from President Zelenskyy and his administration that they felt no pressure? They tell you that the Ukrainians must have felt pressure, regardless of what they said,” Purpura argued, adding:

This is really a theme of the House case. Every time the Democrats say that President Trump made demands or issued a quid pro quo to Zelenskyy on the July 25 call, they are saying that President Zelenskyy and his top advisers are being untruthful.

Jay Sekulow, one of Trump’s personal lawyers, later followed with a similar point about witnesses in the House impeachment hearings, most of whom declined to say, when asked, that they saw in the call a quid pro quo or a bribe.

“This entire impeachment process is about the House managers’ insistence that they are able to read everybody’s thoughts; they can read everybody’s intentions, even when the principal speakers, the witnesses themselves, insist that those interpretations are wrong,” Sekulow said.

He said it is well known that Trump is suspicious of foreign aid, noting that the president also reviewed or held up aid to Afghanistan, South Korea, and Pakistan, among other nations.

4. Ukraine Unaware of Hold on Aid

The president’s lawyers also asserted that Ukraine wasn’t aware that Trump had put a hold on the $391 million in military aid, and never broached the topic with U.S. officials until an Aug. 28 story appeared in Politico.

The article ran more than a month after the July 25 phone call between Trump and Zelenskyy.

“We know there was no quid pro quo on the call; we know that from the transcript,” Purpura said. “There couldn’t possibly have been a quid pro quo because the Ukrainians didn’t know the security assistance was on hold. … There can’t be a threat without the person knowing he’s being threatened.”

Purpura played video of Democrat-called witnesses telling House members that they did not believe the Ukrainian government was aware that the U.S. aid was being held up until the news story appeared in late August.

“The House managers are aware that the Ukrainians’ lack of knowledge on the hold is fatal to their case, so they desperately tried to muddy the water,” Purpura said.

During their presentation to the Senate, House Democrats pointed to an October press conference in which acting White House chief of staff Mick Mulvaney said the administration held up the money in part because it wanted Ukraine to investigate interference in the 2016 election. Mulvaney said this concern didn’t include an investigation of the Bidens.

Responding to Democrats’ repeated assertion that Trump wanted Zelenskyy to do him a favor, and pointing again to the official transcript of the call, Purpura said:

As everyone knows by now, President Trump asked President Zelenskyy to do ‘us’ a favor. And he made clear that ‘us’ referred to our country, and not himself. … There was no mention of the paused security assistance on the call, and certainly not from President Trump.

During his closing argument late Friday, Schiff asserted that Trump thinks that “he is the state.”

Sekulow, who also represented Trump in the investigation by special counsel Robert Mueller into Russian meddling in the 2016 presidential campaign, addressed another Schiff comment from Friday.

Schiff asked senators to put themselves in the shoes of Joe Biden, and imagine that Trump had asked for Ukraine to investigate any one of them.

“Let me begin by saying that you cannot simply decide this case in a vacuum,” Sekulow told senators. “Mr. Schiff said yesterday, I believe it was his father who [told him], you should put yourself in someone else’s shoes. Let’s for a moment put ourselves in the shoes of the president of the United States right now.”

An FBI investigation of Trump for alleged conspiracy with Russia was underway before he was even elected, Sekulow said. Then, a few months into his presidency, Mueller was named as special counsel and investigated the Russian matter for about two years.

Sekulow read a portion of the Mueller report clearing Trump and his campaign of any conspiracy or coordination with Russia to influence the 2016 election.

“In their opening statement, several of the House managers tried once again to relitigate the Mueller case,” he said.

Sekulow pointed out that the Mueller probe cost $32 million in taxpayers’ money and included 2,800 subpoenas, 500 search warrants, and 500 witness interviews.

That investigation, he said, was predicated largely on what the Justice Department’s inspector general later determined to be a faulty FBI process of  seeking a warrant to surveil a Trump campaign adviser, Carter Page.

“The president had reason to be concerned about the information he was being provided,” Sekulow said, referring to the FBI and other intelligence agencies. “Now we can ignore this. We can make believe this did not happen. But it did.”

Democrats were making a “straw man argument,” he said:

The House managers over a 23-hour period kept pushing this false dichotomy that it was either Russia or Ukraine [that interfered in the 2016 election], but not both. They kept telling you the conclusion of the intelligence community and Mr. Mueller was Russia alone [meddled], with regard to the 2016 elections. The report Bob Mueller wrote was on Russia interference, although there is some information [there] in letters regarding Ukraine.