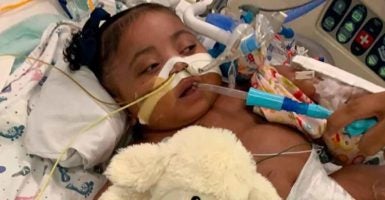 "I fully believe that Tinslee’s life is in God’s hands, and that she deserves a fair and fighting chance at life, however long God has for her," says Trinity Lewis, Tinslee's mother. (Photo: Texas Right to Life)

Tinslee Lewis, a very sick year-old baby, is at the intersection of a bitter Texas debate over current law and ethical responsibilities in end-of-life care.

Texas hospital officials want to withdraw Tinslee’s life-support—after having given her mother 10 days to find alternate care for the baby, which is what Texas law requires.

Trinity Lewis, the girl’s mother, has not been able to find another hospital to take Tinslee and wants to keep the baby on life support. She has filed a lawsuit against the hospital.

Little Tinslee was born prematurely and suffers from a rare heart defect, lung disease, and heart failure. Tinslee’s lungs are unable to deliver oxygen into her bloodstream. After multiple surgeries to correct her condition, she is sedated and on life support; specifically, a ventilator.

Authorities at the Cook Children’s Medical Center in Fort Worth, Texas, claim that she is in pain and concluded that her prognosis is terminal in their effort to withdraw her artificial life support.

Texas hospitals, with the approval of their in-house ethics committees, can legally withdraw artificial life support, regardless of the patient’s objection or a family member authorized to act on the patient’s behalf. The patient or representative, as noted, must be given 10 days to find another hospital to take the patient before care is denied.

Cook Children’s Medical Center has referred Tinslee’s case to 20 other hospitals or specialists, and thus far, all have declined to take responsibility for Tinslee’s care.

Meanwhile, Lewis, objecting to the hospital’s decision to withdraw her baby’s life support, has taken legal action to stop the hospital from doing so.

The New York Times reports that Lewis wants to give her child a “fighting chance” and wants to be the one who makes the final decision, not the hospital. Referring to the 10-day rule to find alternative care, Joseph Nixon, Lewis’ attorney, said, “The culprit in this case is the statute.”

Meanwhile, Texas Attorney General Ken Paxton filed an amicus brief in support of the mother’s case, arguing that current law allows the government to deny a person his or her right to life, and does so without “sufficient process of law.”

In short, the law gives the hospital virtually unilateral power to make the life-or-death decision.

For example, the Christian Medical and Dental Associations declares, “Technology should not be used only to prolong the dying process when death is imminent.”

Likewise, then-Pope John Paul II in his 1995 encyclical “Evangelium Vitae” (“The Gospel of Life”) reaffirmed the well-established distinction between ordinary and extraordinary (aggressive or “heroic”) medical treatment: “To forgo extraordinary or disproportionate means is not the equivalent of suicide or euthanasia; it rather expresses acceptance of the human condition in the face of death.”

The physicians at Cook Children’s Medical Center may be perfectly correct in their clinical assessment that Tinslee’s prognosis is terminal, and they may be right that putting the child on artificial life support is in the category of “extraordinary” care that is not the best ethical alternative in her case.

Nonetheless, given a hospital’s conflict of interest in a life-or-death question of provision of expensive care, it doesn’t logically follow that they should exercise the final judgment.

Under the traditional Hippocratic Oath, the physician is the servant, not the master, of the patient. In the case of a child, it is the child’s parents—and not hospital or government officials—who have the primary right to determine the best interests of the child.

In fact, two of the most notorious medical controversies in recent years—the cases of Alfie Evans and Charlie Gard, two British infants—centered on the British officials’ assertion that they, not the parents, had the ultimate right to determine the “best interest” of the children.

The Tinslee Lewis case is both hard and heartbreaking.

Thus far, faced with a rejection of at least 20 alternative facilities or specialists, Lewis said she wants to get palliative care, to relieve her little girl’s pain, if she is in pain, and further treatment to possibly improve her condition:

I fully believe that Tinslee’s life is in God’s hands, and that she deserves a fair and fighting chance at life, however long God has for her.

My biggest priority is getting Tinslee appropriate care so that I can make the best decision for my baby.

This situation takes away from my job as a mother and lets other people who don’t even know her decide whether her life is worth living.

Parental authority is the primary issue in this case. Charles Krauthammer, then a columnist for The Washington Post and a physician, addressed precisely this issue in the case of Charlie Gard:

The sovereignty of loved ones must be the overriding principle that guides all such decisions. We have no other way.

The irreducible truth is that these conundrums have no definitive answer. We thus necessarily fall back on family, or, to put it more sentimentally, on love.

The right and duty of doctors to act in accordance with traditional medical ethics is, however, also a crucial issue.

As the Christian Medical and Dental Associations has emphasized, “We do not oppose withdrawal or withholding of artificial means of life support in patients who are clearly and irreversibly deteriorating, in whom death appears imminent, and who are beyond reasonable hope of recovery.”

It may be the right decision to withdraw life support. But as a matter of public policy, Paxton, Texas’ attorney general, is correct: We must have scrupulous due process and protections for the patient.

Texas lawmakers are right to address the 10-day rule governing hospital decisions to end a patient’s life support. The law is flawed, and Texas legislators must do their best to uphold both parental rights and physicians’ rights of conscience.

Balancing the rights of patients and parents, and the rights of conscientious medical professionals, is a difficult, prudential exercise. A new Texas law, hopefully the product of careful consultation and deliberation, should reflect both a respect for the primacy of the patient’s wishes and the ethical responsibilities of physicians.

It should repair the law’s due process deficiencies, guarantee a reasonable time frame for patients (or families) to exhaust medical alternatives, and protect the conscience and clinical judgment of medical professionals dedicated to traditional medical ethics, especially the sanctity of life.

Beyond Texas, state officials around the nation should re-examine their end-of-life laws, and encourage doctors and patients and their families to work together to facilitate sound end-of-life care arrangements.