How Republicans Plan to Shape the Next President’s Iran Policy 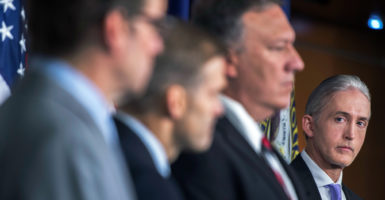 Republican opponents of the Iran nuclear deal have been stymied in their ability to shape U.S. policy with America’s longtime adversary in the Middle East.

“We are very frustrated as members of Congress with this issue because whatever we do, President [Barack] Obama seems hellbent on currying favor with Iran, and nothing we do persuades him otherwise,” Rep. Scott Perry, R-Pa., told The Daily Signal in an interview.

But with Obama set to leave office Jan. 20, Republican lawmakers say they see an opportunity to influence the next president’s approach to Iran.

They plan to use the next few months to respond to what they view as increasingly emboldened misbehavior by Iran since the deal went into effect in January. Tehran agreed to constrain its nuclear capability in exchange for billions of dollars in sanctions relief.

In interviews, Republican senators and House members said they hope to extend a soon-to-expire package of sanctions unrelated to Iran’s nuclear capability, and to continue their oversight by holding hearings and asking questions of the Obama administration’s actions related to the deal.

These Republicans argue that by taking a tougher stance now, they can give Obama’s successor the tools to respond to potential Iranian transgressions, strengthen the deal, or even walk away from it.

“Regardless of who the next president is, Congress needs to take the lead to make sure Iran pays a very heavy price for all it actions, whether it’s related to human rights, support of terrorism, or continuing to improve upon its ballistic missile testing capability,” Perry said, adding:

The Obama administration is essentially allowing Iran to do virtually anything it wants for fear any protesting by the U.S., our Western partners, or the U.N. will scuttle the nuclear deal. Whether the next administration would feel the same way, I don’t know. But Congress has every obligation to bring back our leverage.

The Obama administration has long argued it approached the nuclear deal with a sole intention—closing Iran’s pathways to a nuclear weapon.

The White House contends that without the deal, Iran would have needed only two to three months to gather enough fissile material to build a nuclear weapon. With the deal, the administration argues, this so-called “breakout time” would lengthen to a year or more.

Though Obama hoped the deal would embolden more moderate factions in Iran, and perhaps inspire Iran to improve its behavior in other areas, the agreement did not expressly address those issues. Iran remains subject to U.S. sanctions related to Tehran’s support for terrorism, human rights abuses, and ballistic missile activities.

But critics allege that the nuclear deal—and the economic relief it provided Iran—has encouraged Tehran’s hard-liners to act out in other areas. These critics say that Obama responds cautiously to Iran’s bad behavior because he fears giving the Iranians a reason to walk away from the nuclear deal.

“The administration is still held hostage to its own deal, worried that Iran will back out of the deal if the U.S. doesn’t do everything Iran wants it to, and I think we will see that to the very end with this administration,” Sen. James Lankford, R-Okla., told The Daily Signal.

Iran’s leaders, meanwhile, have complained that their country hasn’t received the economic relief promised under the deal because U.S. law bans Iranian banks and companies from conducting business through the American financial system.

The U.S. has tried to facilitate Iran’s re-entrance into the global economy.

Republican opponents of Obama’s Iran policy consider these recent directives to be unwarranted concessions that are especially troublesome in light of Tehran’s continued support for militant groups in the Middle East and its escalating arrests of foreign nationals, including an Iranian-American businessman who was just sentenced to 10 years in prison.

“We have become true economic development leaders to the Iranians, and that’s a disaster,” @RepMikePompeo says.

Republicans also were outraged when they learned the Obama administration supported the early lifting of United Nations sanctions on two Iranian state banks that were alleged to have helped finance Iran’s ballistic missile program.

This agreement, The Wall-Street Journal reported, occurred on the same day in January when Tehran released four American prisoners and received $400 million in cash as part of a decades-old dispute over a failed arms deal.

“The original Obama administration storyline that said this deal is just in respect to Iran’s nuclear weapons program and that the U.S. will continue to provide sanctions pushback and respond to all things non-nuclear has turned out to be a farce,” Rep. Mike Pompeo, R-Kan., told The Daily Signal, adding:

It goes beyond not responding. The Iranians take Americans hostage, grab our sailors, and now, fired at our ships through its proxy force [the Houthis] in Yemen. And when all that happens, the American response is to continue to encourage global businesses to deal with Iran so their economy can thrive. We have become true economic development leaders to the Iranians, and that’s a disaster. Pompeo and other leading Republican critics of Obama’s Iran policy say they aim to give the next administration more tools to hold the Islamic regime accountable.

Bipartisan consensus exists on the first, perhaps most urgent way to do that. Both Republicans and Democrats have introduced legislation to extend the Iran Sanctions Act, a core element of U.S. sanctions that punishes foreign entities supporting Iran’s energy sector and purchase of advanced conventional weapons.

The Iran Sanctions Act originally became law in 1996 and has been extended successively every five years. It expires Dec. 31. Officials have not considered it as effective as direct financial sanctions that Congress and Obama placed on Iran’s government in 2010, which helped slow the nation’s economy and bring it to the negotiating table.

Obama waived some provisions of the Iran Sanctions Act as part of the nuclear deal, but his administration has expressed openness to extending the components that remain.

“If Congress brings forward a clean reauthorization for the Iran Sanctions Act and nothing else, I imagine the president would sign that,” said Richard Nephew, a former State Department official who served as lead sanctions expert for the U.S. team negotiating with Iran. “I don’t see that as contradicting the commitments we made to Iran in the nuclear deal.”

But Nephew says the president is likely to react less kindly to additional congressional attempts to punish Iran.

For example, the House on July 14 passed legislation to impose new sanctions on Iran and any country that supports Iran’s illicit activities related to its ballistic missile program, support for terrorism, and violations of human rights. The Senate has not voted on the bill, and Obama likely would veto it.

The House, on the same day, also passed a bill to deny the Iranian government and Iranian banks access to U.S. dollars. The administration already blocks Iran from doing business in dollars through the U.S. financial system, but this bill would prevent Iran from using dollars offshore. That legislation also likely will go nowhere in the Senate.

“The administration has been pretty clear it will make sure Congress does nothing to contradict the nuclear deal,” Nephew said. “I would guess that this will continue to be their position until Obama leaves the White House.”

‘Back to Negotiating Table’

However, the next president is expected to be more flexible in how he or she devises an Iran policy.

Republicans in Congress are betting that hawkish Democrats will be more likely to support tougher deterrence efforts under a future president.

“I think there’s a large group of Democrats in the House and Senate who understand Iran presents an enormous threat to the U.S., and who are prepared to push back in ways that are hard to do with Obama in office,” Pompeo said.

Gary Samore, Obama’s former chief adviser on nuclear policy, told The Daily Signal in an interview that Iranian academics have told him they expect the new administration, whoever is elected, to take a tougher line with Iran.

These potential efforts would be challenged, Samore said, since the Western powers that are part of the deal are committed to its current form. Iran also could renege on the deal.

“If the next president would try to renegotiate the agreement, I think he or she will find that difficult to do,” Samore said:

None of the other countries will welcome that. So far, the Iranians have complied with the main parts of the agreement. I can imagine them testing the limits of that if they are unhappy with the next administration’s interpretation of what sanctions relief they are entitled to.

Republicans, meanwhile, say Congress, and the U.S. government as a whole, should not be intimidated by what Iran may do. They argue that the next administration should propose the specter of the U.S. renegotiating—or leaving—the deal unless Iran improves its behavior in non-nuclear areas.

“This deal is so bad I am not sure they can tweak around the edges,” Sen. David Perdue, R-Ga., told The Daily Signal. “If the other Western countries won’t go along with toughening the deal, we can go at it alone and make the Iranians suffer under a U.S.-imposed sanctions regime. That will get them back to the negotiating table.”