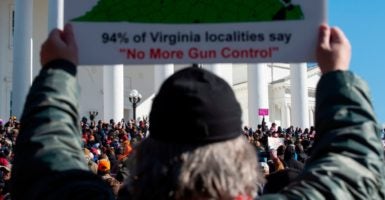 It’s the tea party all over again.

Way back in 2009 the press, followed by a gaggle of left-wing commentators and politicians, did a number on tea party protests, often portraying them—with little evidence—as driven by racist rage against President Barack Obama rather than principled opposition to his administration’s policies.

These same tactics were on full display Monday in the coverage of pro-Second Amendment protests that took place in Richmond, Virginia.

The protests were a response to the gun control policies of Gov. Ralph Northam and the state’s Legislature, which is now controlled by Democrats.

Northam called for a “state of emergency” in response to the protest, and numerous media outlets predicted it would be marked by “hate” and violence, and overall would be a menacing and sordid affair.

Jim Geraghty at National Review gave an excellent rundown of the most absurd headlines and statements from various national media outlets.

NBC reporter Ben Collins said in a now-deleted tweet on Sunday that the gathering in Richmond would be a “white supremacist” rally.

But no violence took place, and it appears that only one person was arrested for violating an anti-mask prohibition put in place by the governor.

Pretty impressive, given that the crowd reached an estimated size of 20,000 on a very cold day.

Though there were some reports that racist groups were planning to attend and infiltrate the event, there was little sign of them when it took place, if it took place at all.

It seems the protesters were aware of how they were being portrayed.

Tristan Justice, who covered the protest, wrote for The Federalist:

Dozens of protesters throughout the rally were sure to remind the public that Northam wore blackface, carrying signs of the Virginia governor’s infamous high school yearbook photo showcasing Democrats’ double-standard regarding racism.

Some media commentators claimed that the pro-Second Amendment demonstrators were insulting Martin Luther King Jr. by holding the event on a holiday celebrating his legacy.

Rev. Al Sharpton even said on MSNBC said that this was putting “salt in the wound” of King’s legacy.

He then doubled down, saying the protesters getting in the way of MLK Day celebrations “are in effect canceling them to have their event. That in and of itself is symbolic of a country that seems to be bent on accommodating the wrong side of the equation of peaceful coexistence and racial justice and fairness.”

King was indeed nonviolent, as the protests were, but to claim that being in favor of gun rights is an affront to his legacy is absurd.

In fact, the right to bear arms was often an essential element to black civil rights, especially when local authorities were doing little to protect black citizens from violence.

Ida B. Wells, one of the founders of the NAACP, once said in 1892—a year in which a massive number of lynchings of black Americans took place—that “a Winchester rifle should have a place of honor in every black home, and it should be used for that protection which the law refuses to give.”

To that very point, former Secretary of State Condoleezza Rice said in a 2018 interview with “The View” that she saw firearm ownership as essential when growing up.

“Let me tell you why I’m a defender of the Second Amendment,” Rice said. “I was a little girl growing up in Birmingham, Alabama, in the late ’50s, early ’60s. There was no way that Bull Connor and the Birmingham police were going to protect you.”

The bottom line is that associating the right to bear arms with anti-black racism is out of step with modern history. It was, in fact, an essential component of the civil rights movement.

The fact remains that the Richmond event on Martin Luther King Jr. Day was a large, entirely peaceful demonstration in defense of a right protected by the Constitution. That seems like a pretty solid justification for a protest.

Contrast all of this coverage and commentary with, for instance, the way media outlets treated the Women’s March protests, which also occurred over Martin Luther King Jr. holiday weekend.

Though many noted the waning interest in these mostly anti-Trump protests, little attention was given to the movement’s troubling ties to anti-Semitism. Any mention of this association—if it was mentioned at all—was buried in the story, not slapped in the headline.

Whether the difference in coverage between the two events was the result of willful bias or the simple cultural norms of those who work in elite media—or both—the fact is, it was obvious and noticeable.

Just like with the tea party movement and even the annual March for Life, America’s national media seems hopelessly biased and one-sided.