What Teaching in China Taught Me About Religious Freedom 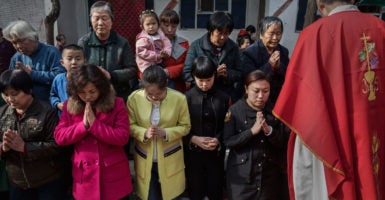 Chris Potts is senior creative writer and editor for Alliance Defending Freedom, an alliance-building, nonprofit legal organization that advocates for the right of people to freely live out their faith.

The meaning of religious freedom came home to me, fittingly enough, by the dawn’s early light, slanting through a dormitory window in China many years ago.

I was one of 10 young people spending a summer teaching English as a second language classes at an agricultural college 3,000 miles west of Beijing, in what’s known now as the Xinjiang Uighur Autonomous Region—home to many Muslims and other minorities. It’s not an especially healthy place to be these days for those who take their faith (Muslim or Christian) seriously.

My journey there provided an enduring education on many levels, deeply expanding my appreciation for Eastern hospitality and culture, Western roads and plumbing (when a drought came on during our tenure, and water was scarce, school officials simply padlocked the bathrooms), and what it means not only to hold to religious faith, but to be able to share it freely.

The students that my friends and I helped were bound for universities the following autumn. They had studied English formally but found little opportunity for carrying on actual conversations with people who spoke the language.

American visits to China were more infrequent then, and to Xinjiang especially so. In the evenings, after classes were over, people from the neighborhood were invited into the college auditorium for “free talk,” where they could and did ask us about everything from U.S. politics to favorite American fertilizers. (It was an agricultural area.)

One night, late in our stay, the Americans drew a capacity crowd that kept our translators busy. Just as we’d exhausted seemingly every subject, and the to-and-fro seemed to be winding down, one last hand went up, albeit hesitantly, in the back.

“Do you really believe Jesus Christ rose from the dead?”

Heads swiveled, murmurs swept through the room, and the Americans all glanced at each other. It wasn’t the first question about faith or the Bible we’d heard, but it was the first to be asked right out in the open.

More typically, our translators had drawn us aside to quiet corners, between classes, to half-whisper a question about the Bible. Sensing their caution, we mirrored it, waiting for country lanes or uncrowded sidewalks before continuing those off-and-on conversations.

But now the really big question was right out in the open, and the murmuring crowd looked at us expectantly. One by one, my friends and I offered our answers, and those quickly led to other questions, pouring out, one on top of the other: “Do you think His mother was a virgin?”; “Did Jesus really heal those people?”; and “Where is Jesus now?”

Within minutes, my fellow teachers and I were each standing in our own little circle of Chinese farmers, homemakers, businessmen, professors, all jabbering questions, comments, and theological opinions while our translators tried desperately to keep up. It was easily the liveliest interaction we’d had in this community, and the Americans kept stealing quick glances at each other, smiling at the happy, unexpected commotion.

I felt a nudge. I looked up, into the face of our official government escort. He was not smiling.

“You can go back to your room now,” he said.

Ah. Got it. Back to our dormitory we went, accompanied all the way by the laughing, arguing, gesticulating Chinese. We bade a fond good night and hit our respective bunks in an afterglow, feeling the joy not only of talking about our faith, but of making what seemed a genuine connection with these people we’d been passing on the streets every day.

That dawn’s early light I mentioned brought a knock at the dorm-room door. Our host, a more long-term visiting American teacher, came in, his face as solemn as the escort’s had been.

“Here’s the thing,” he said. “It’s against the law to preach in China. The difference between ‘preaching’ and answering religious questions from a roomful of people is pretty much up to the interpretation of the Chinese communists. If they want to, they can come in here this morning and arrest you, and throw you in prison.” A pause. “And the United States of America is not going to invade China to get you out.”

Thirty years later, I still feel the chill that went down my back at those words. We’d forgotten the out-of-bounds markers. We weren’t in Kansas anymore.

They didn’t arrest us or throw us out of the country. There weren’t any more “free talks,” however. I’ve often wondered what became of the man who asked the last question that night.

A year later, the solemn-faced government escort moved to America. In time, he became a Christian and a leader in his local church. He laughs more now.

Three years later, in the spring of 1989, my friends and I watched the tanks roll through Tiananmen Square, wondering which of our shy, smiling English students from that earlier summer were in their brutal path.

All of that swirls through my mind when I hear of Religious Freedom Day, being observed Jan. 16. I remember a roomful of people who’d seen faith banished and ridiculed all their lives, but still wanted to know about it—and to choose for themselves.

I think of the growing number of solemn-faced, government-paid teachers and administrators on campuses all over the U.S. who tell young people talking thoughtfully of their faith that it’s time to be quiet and go back to their rooms. And of all the young people who quietly relinquish their freedom and do so.

Our government is still a long way from rolling out the tanks. But free talk is an unpredictable, uncontrollable thing, and even here, there’s so much less tolerance for it than there used to be. Especially on college campuses, and especially when the subject is faith.

The out-of-bounds markers, once so very far apart, keep moving closer and closer. Religious Freedom Day is indeed a cause for celebration, but it’s also a reminder that even in Kansas, we’re not in Kansas anymore.