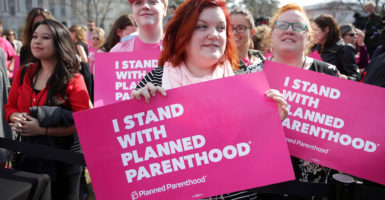 Abortions made up 95% of Planned Parenthood’s pregnancy resolution services, according to the Susan B. Anthony List.

The new report also shows that the organization provided 9,821,548 services to 2.4 million patients during the 2018 fiscal year. The largest amount of services that Planned Parenthood performed in this time period were 4,960,598 STI testing and treatment services, totaling at about 50% of the services the organization offered.

The organization also offered 2,556,413 contraceptive services, including 1,827,625 “reversible contraception clients”—clients who “received contraceptive counseling and care at a Planned Parenthood health center at least once between Oct. 1, 2017 – Sept. 30, 2018.”

Breast care services make up about 2.7% of the services Planned Parenthood performed between 2018 and 2019. The organization, which provides breast exams and mammogram referrals, does not provide mammograms, though supporters like … [Sen.] Amy Klobuchar have praised Planned Parenthood for providing such services.

“At Planned Parenthood, we understand that walking into our health centers is an act of empowerment—an act of agency,” acting President Alexis McGill Johnson and board chair Aimee Cunningham said in a “Message From Our Leadership.”

“Patients come to Planned Parenthood to make decisions over their own bodies and lives so they can actualize their dreams, and our health centers give them the tools to do it,” the leaders added. “As we step forward to meet new challenges, we will continue to care—no matter what—so that every person can dream beyond what they are told is possible.”

The report shows that “abortion and profit” are Planned Parenthood’s top priorities, Susan B. Anthony President Marjorie Dannenfelser said in a statement.

“Once again, Planned Parenthood’s own numbers show abortion and profit are their top priorities,” Dannenfelser said. “Their cancer screening and prevention services, breast exams, pap tests, and even contraceptive services have steeply declined. Planned Parenthood is a bad investment for taxpayers. We thank President Trump for working to curb Planned Parenthood’s taxpayer funding and urge our allies at every level of government to do the same.”

President Donald Trump’s administration declared in July that taxpayer-funded clinics must stop referring women for abortions effective immediately or lose federal funding from the Title X program. Planned Parenthood opted to leave the program rather than stop performing abortions and did so in August, thereby forgoing roughly $60 million a year in funds.