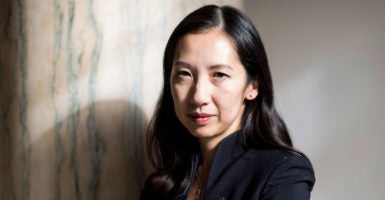 Planned Parenthood’s new president has one thing going for her: She isn’t shying away from the truth. Now that Leana Wen’s taken over for Cecile Richards, she’s finally admitting what the rest of us knew all along. Planned Parenthood may talk about a lot of issues, but it only really cares about one—abortion.

After 12 years of lying low on its abortion business (“lying” being the operative word), Wen has a different strategy for Planned Parenthood. Telling it like it is.

After a BuzzFeed story suggested that the Chinese-American doctor wants her group to “focus on non-abortion healthcare,” Wen surprised everyone by saying exactly what Planned Parenthood’s real priority is. “Our core mission,” she tweeted, “is providing, protecting, and expanding access to abortion and reproductive health care. We will never back down from that fight,” she vowed. “It’s a fundamental human right, and women’s lives are at stake.”

Her tweet, which she followed up with even more militant defenses of abortion, blew more than a decade of subterfuge and hyperbole to bits. Planned Parenthood, who meticulously scrubbed any reference of abortion from its public statements under Richards, is finally making an admission that ought to cause elected officials across America to rethink its half-billion-dollar taxpayer investment.

The truth hasn’t exactly been good for business, the Washington Examiner’s Philip Wegmann points out about Planned Parenthood. To tamp down on the criticism that our government is sending money to America’s biggest abortion chain, Richards used to insist that the procedure only makes up “three percent” of its services—”as if,” Wegmann says, killing is okay as long as you only do it occasionally. Eventually, even outlets like Slate and The Washington Post rejected the statistic as meaningless and misleading.

For years, it has guarded the three percent figure jealously, and a complicit press has reprinted it uncritically. Its former president, Cecile Richards, repeated it during congressional testimony. Journalists at CNN, Politico, and the New York Times publish it without qualification. It’s repeated so often, it has become an ironclad lie. Unraveling the truth would be a disaster for Planned Parenthood. Congress might not write it as many taxpayer checks if the public learned that the largest abortion provider does, in fact, make its money by performing abortions—328,348 abortions a year, according to its latest annual report.

Maybe, others point out, Wen’s new strategy is her way of appealing to the new House majority. After all, Speaker Nancy Pelosi, D-Calif., already promised that hers would be a “pro-choice gavel.” But where Wen’s honesty may backfire is with voters, more than half of whom (55 percent) have no idea that the organization performs abortions—let alone that it’s America’s biggest supplier.

The media likes to talk about Planned Parenthood’s grassroots support. But, Gallup points out, it’s “not clear whether Americans have a favorable opinion of Planned Parenthood because of its role in the national abortion debate or in spite of it.” In the end, Wen’s admission may have done pro-lifers a favor. The more people who know what business Planned Parenthood is truly in, the better.