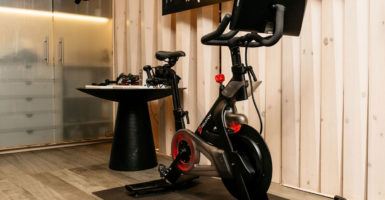 Those claiming a Peloton ad is sexist are actually doing their cause more harm than good. Pictured: A Peloton stationary bike is displayed Dec. 4 at one of the fitness company's studios in New York City. (Photo: Scott Heins/ Stringer/Getty Images)

We are fast approaching the end of 2019, and as we close the book on a turbulent decade, nothing summarizes the state of our culture and our unhealthy relationship with contrived outrage quite like the Peloton ad controversy and the wave of hysteria that has followed in its wake.

Imagine if we could channel that outrage instead into addressing our nation’s obesity crisis.

If you are not familiar with the ad or simply cannot believe that America—land of the free, home of the brave—is full of adults who are distressed over an exercise bike, a quick Google search will fill you in on the situation.

You will also find columnists in highly read publications and joyless hordes on social media claiming to be offended by Peloton’s latest ad, in which a husband dares to gift his already-slim wife a Peloton stationary bike for Christmas.

The commercial has been described as sexist, tone deaf, body-shaming, and reflective of outdated social norms—with every new critique against it more fantastical than the last. The backlash against the ad has been so severe that the exercise equipment company lost nearly a billion dollars in market value since the spot’s release.

This widespread hysteria is beyond absurd on many levels.

First, it serves as yet another shining example of one of our society’s worst qualities: the endless search for conflict in any and everything. It highlights our uncanny ability to turn a positive into a negative, a neutral into a catastrophe. What surely started as a creative and unassuming idea in Peloton’s marketing department has been stripped of its intention and extrapolated to fit the narratives and agendas of radical extremists.

Second, the people claiming the ad is sexist are actually doing their cause more harm than good. Making much ado about nothing and targeting a company in bad faith is not an effective way to move the needle on any agenda. It inserts offense into an otherwise harmless scenario and detracts from legitimate claims of sexism that surface.

Fake news falsely alleging prejudice only serves to create an air of skepticism around these types of accusations; it is akin to crying wolf.

Instead of manufacturing dissent about a milquetoast fitness ad, imagine if those screaming the loudest dedicated a fraction of the same energy to combating the country’s alarming and rising obesity epidemic. It is now estimated that 71% of Americans are overweight, with nearly 40% qualifying as obese.

Americans should be cheering for the growth of Peloton and its clear benefits rather than waging a search-and-destroy campaign against the company for a trivial commercial.

One positive aspect of this whole ordeal was Peloton’s early response to those claiming to be offended. Peloton did not grovel and capitulate and apologize to the mob like so many others before them. Instead, they issued a blanket sorry-you-feel-that-way statement.

In this age of overwrought indignation and attention-seeking fits of rage, too many brands and businesses immediately apologize and run for cover. Ironically, this rarely earns them forgiveness for whatever alleged offenses they have committed and only invites more finger-wagging and exaggerated claims of wrongdoing.

Ultimately, this Peloton saga is a tempest in a teapot, but it does signal where we are and the danger that lies ahead if we don’t make some healthier choices. Through constant needling and media-spurred mania, we have arrived at a place where we Americans are as flabby mentally as we are physically.

The age-old expression “a sound mind in a sound body” underscores the intrinsic connection between physical exercise and mental dexterity. Given the abysmal physical shape of our citizens, it is not surprising that we would have an equally abysmal mental state as well.

It is time to shake the dust off our gym shoes and get back to a healthy routine—if not for our physical benefit, then at least for our collective sanity.

If anything, Americans should get off Peloton’s case and instead get onto one of the company’s bikes.