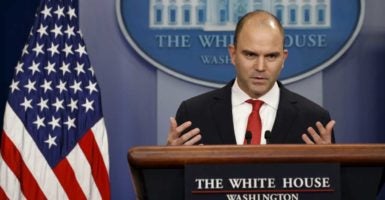 New calls are coming in for the Justice Department to launch a criminal investigation into the “unmasking” scandal swirling around a cluster of former Obama administration officials.

The calls came as House Permanent Select Committee on Intelligence Chairman Devin Nunes, R-Calif., identified a fourth Obama national security official as a “person of interest” who improperly “unmasked” Trump officials and leaked the information to the news media.

In a letter Tuesday to the National Security Agency, the California Republican requested the agency report on improper “unmasking” requests made by Ben Rhodes, former President Barack Obama’s deputy national security adviser for strategic communications, according to Circa. As such, he was the No. 2 ranking official on the National Security Council.

Rhodes’ name is now added to three other top Obama national security officials who are accused of improperly requesting the identities of Trump officials whose phone calls were intercepted by the NSA. Those names were later leaked to the media.

Unmasking or identifying U.S. citizens who are communicating with foreign governments or foreign principals for genuine intelligence purposes is legal, but obtaining the identity of U.S. citizens for partisan political purposes is not permitted under any circumstances. The leaking of “unmasked” U.S. citizens to the news media is unlawful.

“It is obvious that Obama, Brennan, Rice, Power, and Rhodes were involved in massive—underscore massive—unmasking of Trump people, friends and associates after [President Donald] Trump’s nomination and after the election,” diGenova said.

In the letter released by The Hill, Nunes said the committee “found evidence that current and former government officials had easy access to U.S. person information and that it is possible that they used this information to achieve partisan political purposes, including the selective, anonymous leaking of such information.”

The U.S. government records “incidental” conversations with American and foreign principals but keeps their identity anonymous unless a specific intelligence official requests their identification for genuine national security reasons. But Nunes says the unmasking was conducted to spy on Trump officials.

“When you’re dealing with the political use of intelligence methods and capabilities with regards to unmasking, you have suspected criminal activity,” said retired Air Force Col. James Waurishuk, a 30-year senior intelligence officer who served on the National Security Council and later served as deputy director for intelligence at U.S. Central Command.

“To be using it or suspecting it’s been used for political purposes, that automatically transfers that whole effort into a criminal act. So that has to be investigated,” he said. Waurishuk also is vice president of the OPSEC foundation, a nonprofit that represents retired intelligence and military officials.

Retired Col. James Williamson, who served in the Army Special Forces for 32 years in the intelligence field, agreed.

“It’s clear to any layman that these requests were made for political reasons, not for national security reasons. It’s very unusual that there would be a request to unmask a U.S. citizen. If we are truly going to exercise the rule of law, then bring it on,” he told The Daily Caller News Foundation.

Williamson said the investigation should be extended to James Clapper.

“I think Clapper from Day One has been complicit and probably should be investigated as a co-conspirator himself,” Williamson said. “He knew what the constraints were. These hundreds of unmasking requests came after the election.”

In the last days of the Obama administration, Clapper permitted all 17 intelligence agencies to share raw intelligence that the NSA once exclusively held, including unmasking information, for the first time. This may have permitted many previously unauthorized officials, including other Obama political appointees, to access NSA telephone intercepts of Trump officials with foreign leaders.

DiGenova also points to Clapper’s culpability. He said there was a massive expansion in unmasking after the election.

“There was a gigantic uptick in unmasking after the election. The combination of that with Clapper’s loosening of the number of people who could ask for unmasking requires, demands a federal criminal investigation with a grand jury and subpoenas,” he said.

Before joining the number No. 2 at the National Security Council, Rhodes had no military or foreign policy experience.

“I put a special note on Ben Rhodes,” says Waurishuk. “Here’s a man who was brought on board with zero experience in the national security arena. Zero.”

Foreign Policy titled Ricks’ article “A stunning profile of Ben Rhodes, the a——- who is the president’s foreign policy guru.”

Ricks opened his article on Rhodes by quoting from a devastating New York Times Magazine profile that appeared the day before.

“Perhaps the key sentence is this,” Ricks wrote. “His lack of conventional real-world experience of the kind that normally precedes responsibility for the fate of nations—like military or diplomatic service, or even a master’s degree in international relations, rather than creative writing—is still startling.”

Rhodes once saw himself as a literary writer and in 2001 was in his second year of the master of fine arts program at New York University, writing short stories, when the Sept. 11 terrorist attacks occurred. He was majoring in creative writing.

Ricks was not impressed with the young man. “Rhodes comes off like a real a——-. This is not a matter of politics—I have voted for Obama twice,” he wrote.

Rhodes also came under attack after he boasted in the same New York Times Magazine article he duped all the White House reporters on the Iran nuclear deal.

“The average reporter we talk to is 27 years old, and their only reporting experience consists of being around political campaigns. That’s a sea change. They literally know nothing,” Rhodes said.

Williamson says the appointment of Rhodes to the National Security Council was “beyond comprehension.”

“Rhodes was a failed fiction writer,” he told The Daily Caller News Foundation. “But how he got the job in the Obama administration—it is beyond [the] comprehension of somebody with the lack of national security background and the appointment to the NSC staff in any capacity.”