For Taxpayers, College Football Remains a Guilty Pleasure at Christmastime 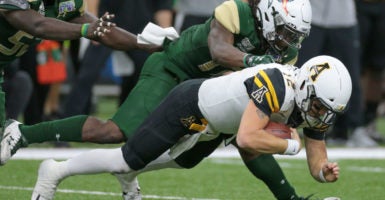 Starting last Friday with Buffalo against Charlotte in the Bahamas (1,235 miles from Buffalo, 733 miles from Charlotte), college football graces the airwaves until Jan. 6. After two straight weeks of football, viewers will get a seven-day break until the national championship airs Jan. 13.

Vedder, who discussed the book earlier this year at The Heritage Foundation, writes that between 2004 and 2015, “Division I public schools spent $71.3 billion on intercollegiate athletics,” and cites a USA Today report that found 21 schools spend “at least $100 million annually.”

To put these figures in perspective, Vedder estimates that fewer than 1,000 students at any given school participate in college sports, so “we can say definitively that there are many schools that spend more than $100,000 per athlete annually on intercollegiate athletics” (emphasis in the original).

In what Vedder calls the “costly athletic arms race,” schools that struggle to compete for national attention with football factories, such as Alabama and Ohio State, lose “close to $1,000 per student” on their sports teams.

Vedder calls this the “athletics tax” on students.

Among the largest beneficiaries of this tax will be those walking the sidelines over the next two weeks. Alabama’s Nick Saban is paid $11 million annually, “over $21 a minute for every minute he breathes, day and night, 365 days a year.” The Birmingham News reported last year that Saban is the highest-paid public employee “by far” in the country.

Vedder writes that a small number of athletic programs may generate enough revenue to fund other university activities, usually for smaller sports such as fencing or scholarships. But he says “far more common is for students to directly (via student activity fees) or indirectly (through their tuition payments) subsidize the athletic operation.”

Universities’ college football budgets are just one example of postsecondary institutions’ questionable spending priorities. Max Eden, a Manhattan Institute senior fellow who reviewed Vedder’s book for the Claremont Review of Books, says universities are “shockingly inefficient” and that higher education is “perhaps the most regressive government redistribution, providing a benefit primarily to those with the strongest economic prospects.”

Vedder explains why in his contribution to Heritage’s Not-So-Great-Society volume released earlier this year, where he writes that a smaller percentage of students from the bottom quartile of the income distribution are attending college today than in 1970.

This finding is astounding, especially considering the size of student loan debt across the country, now at $1.6 trillion and counting, Heritage’s Mary Clare Amselem writes in her latest report.

How could federal loan debt have grown so large when a smaller proportion of students from the lowest-income families are attending college?

A new federal proposal to spend still more on federal loans indicates “a lack of appreciation for the damage that federal loans and grants have had on the American economy, as well as the enormous cost of higher education.”

Amselem, Eden, and Vedder all write that Washington’s ever-growing presence in higher education is not the solution but, in fact, responsible for ballooning tuition costs and irresponsible budgets that allow for the waste of taxpayer resources on campus.

“The worsening of the college crisis,” Vedder writes, “coincides with the rise of the biggest source of third-party payments, federal student financial aid.”

Thus, college football should be considered a guilty pleasure this holiday season. You might as well enjoy it—you’re paying for it. Unfortunately, college football is only one small part of a system of higher education spoiled by Washington and badly in need of reform.