‘If We Can Do It, They Can Too,’ Border Mayor Says of DC, NYC Absorbing Illegal Aliens 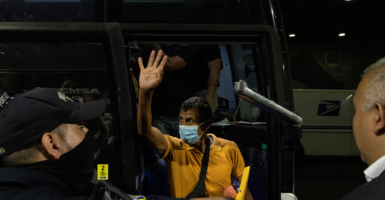 A border mayor has a message for the mayors of Washington, D.C., and New York City as busloads of illegal immigrants continue to arrive in those cities from Texas and Arizona.

“My message is there’s a lot of encouragement, and we did it when we had several thousand at [Anzalduas Park] and during the height of COVID, and a thousand-something coming in a day,” Javier Villalobos, mayor of McAllen, Texas, told The Daily Signal in a phone interview Thursday.

“If we can do that, they can too. They just need to make sure the logistics are correct and do what they have to do,” Villalobos, a Republican, said of New York City Mayor Eric Adams and D.C. Mayor Muriel Bowser, both Democrats. “Their numbers [of illegal immigrants] are pretty low. I know they can do it.”

Texas Gov. Greg Abbott, a Republican, announced in April that he would begin busing illegal immigrants to the District of Columbia in response to the Biden administration’s plan to rescind Title 42, a public health policy aimed at preventing the spread of communicable diseases.

At the time, the administration sought to end the application of Title 42 at the border by the end of May.

However, a federal judge blocked Biden from doing so May 20.

“Texas has also bused over 7,000 migrants to our nation’s capital since April and over 900 migrants to New York City since August 5,” the governor’s office said in a press release on Friday. “The busing mission is providing much-needed relief to our overwhelmed border communities.”

Villalobos, who was sworn in as McAllen mayor in June 2021, said the number of asylum-seekers in his border town has decreased since he took office.

During the first week of August 2021, 11,026 migrants were dropped off in McAllen by U.S. Customs and Border Protection, which equates to nearly 1,600 a day, CBS News reported.

The mayor also said that his city opened an emergency shelter in Anzalduas Park in Mission, Texas, because of the number of migrants.

“We had Border Patrol picking up the people, the asylum-seekers, and of course doing a lot of their paperwork over there by [Anzalduas Bridge],” Villalobos said, adding that agents took the migrants to a Catholic Charities affiliate in downtown McAllen.

Now, roughly 105 to 120 migrants a day are dropped off by Border Patrol in McAllen, according to Villalobos, who said he initially questioned Abbott’s plan to bus illegal immigrants to New York City and the District of Columbia.

“When I did talk to the governor about the issue, when I first found out that he was going to try to bus some immigrants out, the initial concern was ‘under what authority?’” Villalobos said, noting that often the destination for the migrants is a northern state, New York, or [Washington,] D.C.

“But it turns out that, no, these are the individuals that voluntarily want to go to those areas, so if they voluntarily want to go [and] that’s the ultimate destination, then it speeds up the process for us here if they’re from this area or from whatever other area,” the McAllen mayor said. “So, I think it’s a good situation … if that’s the ultimate destination, they’re being assisted, and I hope we can keep on going.”

Lora Ries, director of the Border Security and Immigration Center at The Heritage Foundation, slammed the Biden administration’s handling of the ongoing border crisis and its resistance to deporting illegal immigrants. (The Daily Signal is Heritage’s multimedia news organization.)

“It is incumbent on Congress to defund this chaos, take back control over immigration law, give CBP and ICE both the tools they need to prevent illegal immigration and significant resources to fully enforce our immigration laws,” she said.

Arizona Gov. Doug Ducey, a Republican, followed in Abbott’s footsteps a month later, in May, when he began busing illegal immigrants to the District of Columbia.

“This is a problem caused by Washington. So we are bringing it to Washington,” Ducey spokesman C.J. Karamargin told the Daily Caller News Foundation at the time. “This is the flow of asylum-seekers, migrants entering into the United States or …   entering through Arizona because it’s easy, and bearing the burden for this is our communities.”

“Like folks in Yuma, where hospitals, community organizations, [and] nongovernmental organizations are being strained tremendously. So, the goal here is to alleviate the burden for Arizonans,” Karamargin said.

Bowser has twice unsuccessfully requested the National Guard’s assistance in processing about 200 buses of illegal immigrants from Arizona and Texas arriving at Union Station, estimated at over 4,000 so far.

After her July 19 request was turned down by Defense Secretary Lloyd Austin, Bowser sent another letter to White House aides July 22 in which she harshly criticized Abbott and Ducey.

“The migrant crisis facing our city and our country through cruel political gamesmanship from the governors of Texas and Arizona must be dealt with at the federal level. Our ability to assist people in need at this scale is very limited,” Bowser said in the letter.

“Instead of rolling up their sleeves and working with the Biden/Harris administration on a real solution, Governors Abbott and Ducey have decided to use desperate people to score political points,” Bowser wrote.

“It is unimaginable what the governor of Texas has done,” Adams said. “When you think about this country, a country that has always been open to those who are fleeing persecution and other intolerable conditions, we’ve always welcomed that.”

“This governor is not doing that in Texas, but we are going to send the right message, the right tone, of being here for these families,” the New York City mayor said.