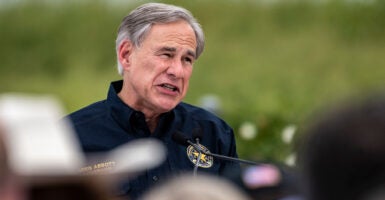 "Texas is providing charter buses to send these illegal immigrants who have been dropped off by the Biden administration to Washington, D.C.," says Gov. Greg Abbott, pictured during a visit to the border wall near Pharr, Texas, on June 30, 2021. (Photo: Sergio Flores/AFP/Getty Images)

Texas Gov. Greg Abbott says he will charter buses to send migrants entering his state illegally to Washington, D.C., in response to an expected border surge when the Biden administration ends a public health measure known as Title 42.

“To help local officials, whose communities are being overwhelmed by hordes of illegal immigrants who are being dropped off by the Biden administration, Texas is providing charter buses to send these illegal immigrants who have been dropped off by the Biden administration to Washington, D.C.,” Abbott, a Republican, said during a Wednesday press conference.

Title 42 is a Trump-era public health order put in place to control the spread of COVID-19. The measure, which has resulted in the expulsion of over 1 million illegal immigrants since the beginning of the pandemic, will end May 23, the Centers for Disease Control and Prevention announced Friday.

“We are sending them to the United States Capitol, where the Biden administration will be able to more immediately address the needs of the people that they are allowing to come across our border,” Abbott said of illegal immigrants who enter Texas from Mexico.

As part of his announcement, Abbott signed a letter addressed to Texas Division of Emergency Management Chief Nim Kidd, who is charged with carrying out the busing operation.

[Border security advocates initially cheered Abbott’s announcement, but some later criticized it for leaving out key details included in a press release from his office, specifically that the trip to D.C. would be voluntary for illegal immigrants.]

Since March 2021, Abbott has reinforced the Texas Department of Public Safety and Texas Military Department in what he dubbed “Operation Lone Star.”

During Wednesday’s press conference, the governor pledged to ramp up the operation’s ability to interdict illegal activity through vehicle inspections since officials expect increases in illegal immigration.