In Round 1 of Ukraine Peace Talks, Zelenskyy Holds His Own With Putin 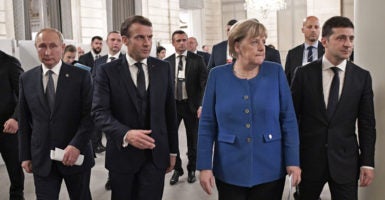 KYIV, Ukraine—These days, it gets dark around 4 p.m. here in Ukraine’s capital city. The leaves are all gone from the trees, and the skies are often gray.

The Dnieper River hasn’t iced over yet. However, about 400 miles southeast of Kyiv in Ukraine’s embattled Donbas region, the front lines of Europe’s only ongoing land war have been frozen for years.

There, within a network of World War I-style trenches, Ukrainian troops are hunkering down in preparation for their sixth straight Continental winter at war. Since 2014, those soldiers have been engaged in daily combat against a combined force of Russian regulars, pro-Russian separatists, and foreign mercenaries.

With its daily artillery barrages, sniper potshots, and rampant land mines, the war hasn’t changed much over the years. Yet, a tepid thaw recently has occurred in Kyiv’s frosty relations with Moscow, offering Ukrainians a slight glimmer of hope that peace talks, which have been locked in an impasse for years, may now at last have a realistic path forward.

“Ukraine is an independent, democratic state, whose development vector will always be chosen exclusively by the people of Ukraine,” Zelenskyy said while in Paris.

It was the first meeting in three years for the so-called Normandy Format—a negotiating framework that dates back to 2014—to end the war in eastern Ukraine.

It also was Zelenskyy’s first face-to-face meeting with his Russian counterpart, and many Ukrainians monitored Monday’s events in Paris with bated breath, unsure how their president, a former comedian, would fare at the negotiating table across from Putin, a former KGB officer and seasoned statesman.

The general consensus among Ukrainians is that Zelenskyy acquitted himself just fine. True, he didn’t achieve a breakthrough, but he also didn’t fold to any of Putin’s demands.

“Contrary to the expectations of those who blamed Zelenskyy for a ‘peace at all costs’ attitude, he came back from the Normandy Format meeting with no apparent loss to Ukraine’s national security interests,” said Julia Kazdobina, head of the Ukrainian Foundation for Security Studies.

“Russia did not get its way,” Kazdobina told The Daily Signal.

Even Petro Poroshenko, the incumbent who lost Ukraine’s presidency to Zelenskyy in a landslide in April, conceded that the Paris meeting was neither “a step forward, nor two back.”

Since taking office May 20, Zelenskyy has tried to resuscitate the Normandy Format talks. In turn, Moscow declared that Ukraine’s implementation of the so-called Steinmeier Formula was a prerequisite for a return to the negotiating table.

First proposed by former German foreign minister Walter Steinmeier at a Normandy Format meeting in October 2015, the plan calls for parliamentary elections in the Donbas, under supervision by Ukrainian and international monitors, while the embattled territory remains under a “special status.”

In October, Zelenskyy announced his decision to accept the Steinmeier Formula. The Ukrainian president also made clear, however, that he wouldn’t allow elections to happen without the complete withdrawal of Russian troops as well as the return of all Ukrainian prisoners and a full cease-fire.

In a joint communiqué following the Paris summit, the four countries committed to a full cease-fire by year’s end, as well as an agreement in principle on the necessity of implementing the Steinmeier Formula.

The document also proposed new demining operations, the disengagement of troops from three new front-line sites by the end of March 2020, and the establishment of new locations for civilians to cross no man’s land.

Beyond the joint statement, all parties agreed to add nighttime operations to the Organization for Security and Cooperation in Europe’s mission to monitor the cease-fire. For years, the OSCE’s cease-fire monitors have been prohibited from working at night, spurring a pattern of nocturnal combat.

Collectively, these agreements “give hope of a peaceful resolution,” Kazdobina said, adding: “However, one has to keep in mind that peace depends mostly on whether Russia is acting in good faith.”

Despite the agreed-upon points in the joint statement, Kyiv and Moscow remain at loggerheads over a spectrum of other disputes.

Following an hourlong, one-on-one meeting with Putin, Zelenskyy told Ukrainian journalists: “Look, it’s very difficult to negotiate [with Putin], but today there were moments when we agreed on something, on certain things.”

Zelenskyy rejected Russian demands for the federalization of Ukraine, as well as a permanent status of autonomy for the two Russian-controlled, breakaway territories in the Donbas. The Ukrainian leader also refused to negotiate directly with separatist leaders.

“[We] are not holding direct talks with representatives of illegal authorities in the temporarily occupied areas,” Zelenskyy said.

After years of denying that Russia’s regular forces are involved in the war at all, it was unlikely going into Monday’s meeting that Putin would reverse course and pledge to cut off Moscow’s support for its forces in the Donbas. Such a move would mark a de facto admission of Russia’s culpability in fanning the conflict.

Putin mostly stuck to his entrenched negotiating positions, characterizing the war as an “internal” Ukrainian matter and calling on Ukraine to further modify its constitution according to Russia’s dictates, as part of a pathway to peace.

The war in Ukraine began with a Russian hybrid military operation in the spring of 2014, devolving into an outright invasion by regular Russian forces that summer. Today, the conflict is a limited, conventional war.

Since February 2015, a cease-fire known as Minsk II has locked the war along its current geographical boundaries and regulated its intensity. But combat never ended.

Roughly half of the 13,000 soldiers and civilians killed so far died after Minsk II went into effect. As of Nov. 15, a total of 3,344 civilians had died in the war, according to the United Nations.

Neither side is fighting to achieve a breakthrough or take new ground. Both camps are simply fighting for the sake of not backing down first.

Ukrainian soldiers continue to die at the rate of about one every three days. Their enemies are likely dying at a far higher rate, according to Ukrainian military estimates. But those numbers cannot be independently verified.

The Minsk II cease-fire required Kyiv to implement a constitutional amendment to decentralize power from the central government. On that, Zelenskyy says Ukraine has lived up to its end of the bargain.

However, holding elections in the Donbas—another tenet of the Minsk II deal—remains a bridge too far, Zelenskyy says, until all Russian troops have left and Ukrainian government forces regain full control of the country’s border with Russia.

To that end, Germany’s Merkel signaled that she would be open to some modifications of the Minsk II accord to avoid an intractable impasse in negotiations.

A milestone prisoner swap between Ukraine and Russia in September helped pave the way for Monday’s meeting. Kyiv also has attempted phased withdrawals of troops from front-line positions. However, those efforts have not led to an overall de-escalation of the conflict, according to military reports.

Although the meeting yielded no breakthroughs, it did open the door for more negotiations to end Europe’s bloodiest conflict since the Balkan War.

“The new dynamics in the Normandy Format talks represent a window of opportunity,” a spokesman for Josep Borrell, the European Union’s high representative for foreign affairs and security policy, said in a statement released Tuesday.

Zelenskyy and Putin agreed in a private meeting to carry out a comprehensive prisoner swap by Dec. 31, Ukrainian news agencies reported. According to Kyiv, 72 Ukrainians are being held prisoner by Russia’s forces in the Donbas.

“This is a big step because 72 people may return home. I really want this,” Zelenskyy told reporters following Monday’s meeting in Paris.

Zelenskyy has faced weeks of peaceful protests across Ukraine in opposition to his proposed acceptance of the Steinmeier Formula. War veterans in particular have been outspoken in their opposition to the move, demanding that Zelenskyy not hold elections in the Donbas until all Russian troops have left the contested territory.

“We cannot make any concessions until the last sliver of Ukrainian land is free,” Poroshenko said at a rally Sunday in Kyiv.

“We forget that any lasting peace is only possible on a just foundation,” Volodymyr Ohryzko, a former Ukrainian foreign affairs minister, told reporters Nov. 8 in Kyiv. “Peace made under pressure will only become a precondition for a new war. Is that what we want to achieve?”

Despite the resuscitated peace talks, sporadic fighting continued up and down the front lines this past week, resulting in multiple Ukrainian casualties. Three Ukrainian soldiers died in combat Monday, the same day the Normandy Format delegations met in Paris.

By modulating the volume of violence, analysts note, the Kremlin uses the war to exert pressure on Ukraine in an ongoing effort to derail the country’s pro-Western pivot.

Yet, according to recent polling, in spite of the war a growing share of Ukrainians are content with their country’s democratic progress more than five years after the pro-Western revolution in 2014.

The International Republican Institute, an American think tank, conducted a survey in Ukraine’s 24 largest municipalities in September and October to gauge Ukrainians’ confidence in their country’s postrevolutionary trajectory.

In 23 of those 24 municipalities, a majority or a plurality of respondents said Ukraine is “headed in the right direction”—a notable rise from 2018, according to IRI’s findings.

“Ukrainians are feeling positive about their country’s future and remain hopeful for continued progress on European integration,” Stephen Nix, the think tank’s regional director for Eurasia, said in a statement posted to the think tank’s website.

At the Gulliver shopping center in Kyiv this week, children lined up for photos at Santa’s workshop. American Christmas music staples such as “Jingle Bells” and “Holly Jolly Christmas” are piped in an endless loop through the capital city’s Metrograd shopping complex.

Despite the fact that Ukrainians don’t celebrate Thanksgiving, many stores held “Black Friday” sales after the American holiday.

Evidently, the holiday season is in full swing. This is further evidence that, outside the war zone, life goes on pretty much as normal for most Ukrainians.