Praise, Shade, and the Politics of Public Funerals 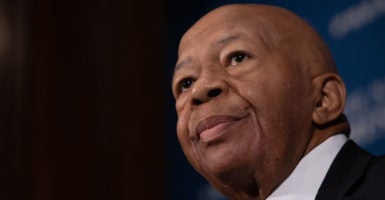 Public funerals have become somewhat of a unique tradition in American politics. While in times past, deceased politicians, and even famous entertainers, have laid in state—whether it was Abraham Lincoln or John F. Kennedy—they were mostly honorific, stately affairs dedicated to honoring the dead and dutifully noting their lifetimes of service and sacrifice.

But at this stage of our American civilization, the trend seems to be turning, and a lot of that has to do with the intense media scrutiny that comes along with such public events.

The intense politicization of public funerals seems to have become the fashion of our day. While it is not a new tradition per se—political speeches at the funerals of historical figures date back to when Greek general Pericles spoke at the funerals for Greek soldiers during the Peloponnesian War or when Roman general Mark Antony spoke at Julius Caesar’s public funeral—the tradition seems to be reaching a high art form here in America.

McCain’s was a death foretold, most publicly by McCain himself. He rose from his deathbed, where he lay suffering from terminal brain cancer, to cast the final deciding vote in the U.S. Senate to save the Affordable Care Act from the jaws of certain defeat.

In so doing, he publicly rebuked a political rival—President Donald Trump—who had campaigned furiously on a promise to “repeal and replace Obamacare” within the first day of his administration.

Earlier in the presidential campaign, Trump had directly insulted McCain, dismissing his military sacrifice by saying, “I prefer war heroes who weren’t captured.” This deep, personal insult lingered with McCain and perhaps gave him the strength to rise from the ashes one last time to repudiate his antagonist.

But it didn’t just end there. McCain called former President Barack Obama in the weeks before his death and asked Obama to deliver a eulogy at his funeral. Obama and McCain had been bitter partisan foes dating back to the 2008 presidential campaign and fought constantly during Obama’s eight years in office.

During the eulogy, Obama confessed, “Now, when John called me with that request earlier this year, I’ll admit sadness and also a certain surprise.” But the former president, perhaps sensing the political moment, nonetheless played along. While ostensibly his praise of McCain was an effort to bury the hatchet, or even to restore civility to the partisan debate, it also served a far more sinister function: to bury the hatchet in Trump, McCain’s mortal nemesis.

The moment was not lost on Trump, who was notably snubbed by having been publicly banned from attending by McCain’s wife. It was almost as if everyone else was invited to a party in Trump’s own town, except Trump himself.

Trump, in characteristic fashion, hit back at a campaign rally a few months later. While speaking at a tank factory in Lima, Ohio, Trump exclaimed, “I gave him the kind of funeral that he wanted, which as president, I had to approve … I didn’t get a thank you, but that’s OK. We sent him on the way, but I wasn’t a fan of John McCain.”

Why speak ill of the dead at the campaign rally in Ohio? Well, precisely because it was not in Washington. Trump was making the case that these were his people, the people who elected him, so who cares that he wasn’t invited to the elite insider party in Washington?

While president, Trump adroitly used McCain’s own funeral to continue to drum home the case that he is not a corrupt Washington insider but a man of the people.

Just this past October, another major political funeral was held for former congressman—and another Trump nemesis—Elijah Cummings.

Cummings, an African American Democrat representing Baltimore and surrounding counties, had ceaselessly criticized the president and even chaired several congressional investigations into improprieties alleged against the Trump administration. Perhaps most worryingly for the president, Cummings, as chair of the Committee on Oversight and Reform, began an impeachment inquiry into the president.

Because Cummings had been a long-serving member of Congress, several congressional leaders, including Senate Majority Leader Mitch McConnell, were in customary attendance. As they gathered to pay their respects to the fallen congressman, Cummings’ friend and pallbearer shook their hands in succession—but notably refused to shake McConnell’s outstretched hand. The televised slight reverberated around the political world—with many initial reactions assuming it was a partisan jab at McConnell.

It wasn’t. Although the man, subsequently identified as Bobby Rankin, did intentionally withhold the greeting, his reasons—while rude and disrespectful—were not partisan but in fact deeply personal.

As it turns out, Rankin’s brother had died the previous year from cancer reportedly caused by drinking contaminated water while a Marine serving at Camp Lejeune in North Carolina. According to Rankin, his brother was refused the veteran’s medical benefits he was entitled to, and he blamed McConnell for failing to intervene on his brother’s behalf.

“When I saw Mitch McConnell, all I saw was my brother’s face,” said Rankin, “I could not put my hands in the man’s hand who refused to help somebody who served his country.”

While the media assumed partisan rancor, the real political importance of this moment was underreported. It was that the leading Republican in Congress, a well-known hawk on issues of national security, was being blamed for letting one of the troops down. And, ironically, the soldier’s brother was also the good friend of one of the leading doves in Congress.

If it is a truism that politics makes strange bedfellows, it is perhaps equally true that political funerals, as evidenced by those of McCain and Cummings, make strange archenemies.

During his funeral oration for the fallen Greek soldiers, Pericles wisely observed, “All men praise the dead, and, however preeminent your virtue may be, I do not say even to approach them, and avoid living their rivals and detractors, but when a man is out of the way, the honor and goodwill which he receives is unalloyed.” We Americans have shortened the admonition to the simple phrase “do not speak ill of the dead.”

But the art of rhetoric at political funerals, especially the act of praising the dead, can often veil the intent of shaming one’s living foes.

Just as McCain’s funeral turned into a “meeting of the Resistance,” as a writer for the liberal magazine The New Yorker put it, so did the funeral for Caesar as depicted by Shakespeare in the eponymous theatrical work.

Antony, a close friend of Caesar’s, sensed the political animus against the recently assassinated leader and immediately sought to allay any concerns over his subsequent eulogy, with the infamous lines, “I come to bury Caesar, not to praise him./ The evil that men do lives after them;/ The good is oft interred with their bones.”

The line is scalding in both its denial and its accusation. He both chided the opposing senators for continuing to disparage Caesar, as if somehow he could continue to do “evil” even after he was dead, and inferred that within Caesar lay the bones of a man with some residue of “good.”

The speech continues in almost inverse fashion from that of most funeral orations. He first praised his friend Caesar as a man whose outsized ambition nonetheless permitted him to charitably heed cries of the poor, and subsequently cast Caesar’s chief antagonist, Brutus, as a man whose own honorable character should have afforded him the dignity to at least mourn a man who he once loved.