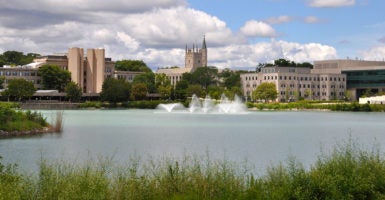 A signed editorial in The Daily Northwestern apologizing for the student newspaper's coverage of protests surrounding an appearance by former Attorney General Jeff Sessions has been widely criticized by journalists across the nation. Pictured: The campus of Northwestern University in Evanston, Illinois. (Photo: Getty Images)

A student newspaper that apologized to readers for “retraumatizing” them through its coverage of a disrupted campus appearance by former Attorney General Jeff Sessions also declined to publish a different take on the incident in a letter from a College Republicans chapter.

Dominic Bayer, vice president of the College Republicans chapter at Northwestern University in Evanston, Ill., told The Daily Signal on Tuesday that The Daily Northwestern refused to publish a statement submitted Nov.  6 by the club as a letter to the editor or op-ed about protesters’ treatment of Sessions the night before.

The College Republicans club hosted the appearance by Sessions, which protesters loudly disrupted both inside and outside the hall.

The Daily Northwestern covered the protests surrounding Sessions’ speech. Later, the outlet deleted some photo coverage of the Sessions protest along with the names of some interviewed protesters after individual students voiced concerns.

In an editorial Sunday, The Daily Northwestern stated that its coverage “harmed many students,” including by publishing photos that some protesters found “retraumatizing and invasive.”

Via email Nov. 6, the College Republicans’ Bayer asked the newspaper to publish its statement on the protests against the former attorney general.

“Thanks for reaching out! Unfortunately we do not accept LTEs [letters to the editor] from student political organizations as contributions,” The Daily Northwestern’s opinion editor, Pryanshi Katare, replied to Bayer in a Nov. 7 email. “We hope you understand.”

The Daily Northwestern calls itself “the paper of record” for Northwestern University, home to the celebrated Medill School of Journalism, which now has a longer official name.

In a response to Katare less than two hours later, Bayer, 21, a senior from Manizales, Colombia, suggested as a compromise that the College Republicans statement be submitted on behalf of either an individual member or members.

The Daily Northwestern has yet to respond to that email, Bayer said.

“They wouldn’t publish it, no matter what,” Bayer, who is studying political science and economics, told The Daily Signal.

“We followed up and they just ghosted us. They just wouldn’t respond,” Bayer said. “They just used ‘We don’t publish letters from groups’ as an excuse to deny it. And then, when we asked them for an alternative, they just ignored us.”

The editor in chief of The Daily Northwestern, however, says he was not aware that the College Republicans affiliate was told that the newspaper doesn’t publish letters from campus clubs.

Troy Closson told The Daily Signal on Wednesday that the student newspaper in fact does publish letters to the editor or op-eds from “student organizations.”

Closson, a senior, was one of eight Daily Northwestern editors who signed the editorial apologizing to fellow students for its reporting on the protests of Sessions’ speech.

The editorial of apology by Closson and seven other editors has been widely criticized by journalists across the nation, including fellow student journalists. It reads in part:

We feel that covering traumatic events requires a different response than many other stories. While our goal is to document history and spread information, nothing is more important than ensuring that our fellow students feel safe — and in situations like this, that they are benefitting from our coverage rather than being actively harmed by it. We failed to do that last week, and we could not be more sorry. …

As a campus newspaper covering a student body that can be very easily and directly hurt by the University, we must operate differently than a professional publication in these circumstances.

Ultimately, The Daily failed to consider our impact in our reporting surrounding Jeff Sessions. We know we hurt students that night, especially those who identify with marginalized groups.

The Daily Northwestern editorial explained that the student newspaper deleted some photo coverage of the Sessions protest along with the names of some interviewed protesters after individual students voiced concerns.

The College Republicans’ proposed letter to the editor reads in part:

Picture President Obama giving a speech at the University of Alabama [and being] welcomed to campus by protesters, who interrupt his speech by screaming, pounding the hall’s doors, and shouting the most obscene vulgarities in an attempt to silence him. There’s really no need to imagine: With the exception of the public figure and locale, this set of events happened this very week.

The letter says that although College Republicans valued free speech, the disruptive actions of protesters at the Sessions event were “unbecoming to members of the Northwestern community” and robbed the school of a chance to engage with and learn from a public policy expert.

Sessions is a former prosecutor and attorney general of Alabama who served as a Republican senator from that state for 20 years before becoming President Donald Trump’s first attorney general.

The Daily Northwestern’s FAQ page lists several reasons why a letter to the editor may not be published, but doesn’t mention a policy against publishing submissions from campus clubs.

Ken McIntyre contributed to this report, which has been modified since first published.