We Need Steady Leadership, Not Fire-Starters, to Guide a Divided Nation 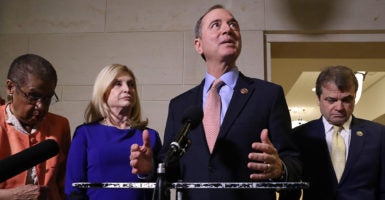 The current state of American politics is eerily reminiscent of the wildfires that recently engulfed the state of California. The conditions are right, the tinder is dry, the crosswinds are high, and the landscape is ripe for conflagration.

This is why it’s incumbent upon our political leadership to refrain from lighting a match at this critical time.

The divisions are becoming factious. Some are calling for the president’s head on a platter for alleged “high crimes and misdemeanors,” while the other half of the electorate views the process as a fraudulent end run around the democratic process that elected the president.

And yet, despite the tension, politicians on both sides of the aisle continue to fan the flames with combustible rhetoric and brazen stunts designed to further infuriate an already volatile polity.

The GOP leadership in Congress has notably engaged in several outrageous stunts—ranging from obstructing closed-door testimony from a witness into the president’s alleged misdeeds to sending empty packing boxes to the offices of several congressional Democrats, which sparked a minor security scare that the Capitol Police had to be called in to investigate.

Meanwhile, the president continues to lead the charge with incendiary accusations against members of Congress that he views as his mortal enemies.

Contrast this growing political crisis with the robust—but in some respects slowing—economic growth the country is experiencing and one can see how a political crisis can easily spill over into a social upheaval.

For most Americans, gaining an economic foothold and continuing to benefit from full employment and rising wages trumps their concerns over the machinations of an insider political fight that seems remarkably distant from their everyday lives.

The Democrats aren’t doing any better in terms of their handling of the impeachment inquiry. Their continued failure to disclose evidence and key witnesses—including the shielding of testimony for the anonymous “whistleblower'” whose damning allegations initially sparked the congressional impeachment inquiry—seems, from the perspective of Trump supporters, clear evidence of a deep state run amok.

Adding to the secrecy of the process, House Intelligence Chairman Adam Schiff committed an unforced error in mischaracterizing the president’s conversation with Ukraine’s president—which go directly to the substance of the committee’s inquiry.

Schiff’s gaffe was a serious opening for the president to accuse the whole process of being a kind of “kangaroo” court in which the fact-finding mission of the Congress had already been subsumed by a foregone conclusion that the president is guilty as charged.

As a result, both sides find themselves in an escalating war of rhetoric and legal chicanery that threatens to derail the steady progress America has made on the economic front since Trump was elected. Signs are already pointing to the fact that political uncertainty—over impeachment, trade deals, and economic investment—is affecting the stock market and other barometers of economic health.

Americans are facing a state of uncertainty that is somewhat unprecedented in recent history: Neither side of the fractured political leadership is taking the moral high ground. Both seem to be pursuing a scorched-earth strategy designed to destroy the other at all costs—while laying waste to American political and cultural norms in the process.

We are beyond partisanship and beyond obstructionism. We have become openly and deliberately hostile to each other. The blame for this state of affairs lies squarely at the feet of our political leaders, on both sides of the aisle, who are behaving not like leaders but like squabbling schoolchildren.

It almost goes without saying that leadership must be founded upon moral principles in order to steady the ship during times of crisis. There needs to be leadership that, irrespective of its partisan ideology, can be trusted to behave with decorum and decency so that whatever result is reached—whether an impeachment and conviction or absolution—the American people can at least have faith in the process.

Unfortunately, this is not the current state of affairs.

As things stand, the issues that divide us have been whipped into a fever pitch. People are terrified that these political brush fires will soon spread into a blazing revolution that cannot be easily contained; they fear a prolonged and uncontrolled conflict that will pit citizen against citizen in interminable internecine strife.

Perhaps even more crucial, amid our partisan rancor, we seem to have lost sight of the role of government–which is to, in fact, govern responsibly.

As a nation that is so sharply divided, we cannot harness the full capacity of our collective genius to solve the real, mounting challenges—on the environment, on trade, on the national debt and immigration—that we continue to face. Instead of making progress, we are essentially resigned to managing a chaotic storm of our own making.

My father taught me as a young boy that a steady hand on the tiller can weather any storm. We the people are watching the conduct of the Congress and the White House as we drift into increasing concern about the ability of Washington to govern and lead us.

It is time for all parties to step back and lower the temperature. An open conflict and lack of respect, both personal and professional, between our president and the Congress is very dangerous and has the potential to cause serious ramifications for our nation.