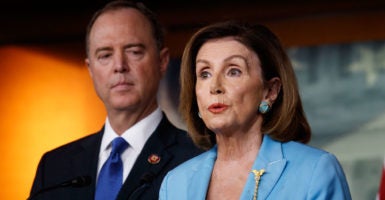 "We all know they started working on impeachment of the president the day he took his oath of office," says Rep. Mike Johnson, R-La. Pictured: House Speaker Nancy Pelosi and Rep. Adam Schiff, D-Calif., in a press briefing Oct. 2. (Photo: Tom Brenner/Getty Images)

The chairman of the Republican Study Committee criticized the impeachment proceedings against President Donald Trump, deriding them for being conducted “in secret.”

“The problem right now is they’re doing this all in secret,” says Rep. Mike Johnson, R-La., “They’re having these secret depositions and these top secret hearings in a basement somewhere.”

“I’m on the House Judiciary Committee, for example. I’m the committee [with] jurisdiction over impeachment. I am not allowed to review any of the documents, any of the testimony that’s been presented this far,” Johnson added during the fourth episode of the caucus’ “Elephants in the Room” Facebook discussion with lawmakers.

The episode was shot shortly before the House voted 232-196 to pass a resolution outlining the details of the impeachment process.

Johnson says he’s reached out to Democrats, including Rep. Adam Schiff, D-Calif., who is spearheading Democrats’ impeachment inquiry, to try to set up a time to review the impeachment proceedings.

“I sent a letter … to Chairman Schiff and the chairman of the other two committees, Democrat chairmen who are engaged in this, and I said, ‘Here’s the House rule. It says I have a right to review these,’” Johnson said. “’I want to know a date and time when I can come do that.’ Nothing. It’s crickets.”

Rep. Roger Marshall, R-Kan., who joined Johnson for “Elephants in the Room,” told The Daily Signal that Congress will have to answer to the American people for the impeachment probe process.

“If we’re going to undo the results of the 2016 election, if we’re going to go against the votes of 64 million Americans, it should be a higher bar, not a lower bar [for the impeachment process],” Marshall said.

Johnson added that the impeachment process has been an abuse of power.

“It allows Adam Schiff to be basically the counsel, the judge, and the jury over this,” Johnson said.

He also discussed that the impeachment push seemed “predetermined,” saying:

We all know they [House Speaker Nancy Pelosi and other Democrats] started working on impeachment of the president the day he took his oath of office. … They changed the narrative several times along the way, but they’ve always been trying to get to this desired end. This is very Machiavellian. The means justify the end, I guess, and if they have to steamroll over all the Republicans in Congress, over the will of the American people, over due process, over the rules … That’s what we’ve gotten.

So, at the end of the day … people will make up their minds about the legitimacy of that process.

The Republican Study Committee recently released a new health care plan that, among other provisions, would increase how much people could contribute pre-taxes to health savings accounts, and would create guaranteed coverage pools designed to help Americans with preexisting conditions.

Johnson says the new plan would help drive down health care costs and help Americans with “preexisting conditions, … with chronic illnesses, and serious health concerns” get access to care.

“It personalizes health care by putting decisions for health care back in the hands of those who know best. And that’s the patient and the physician, not the federal government,” says Marshall.

The Kansas Republican said the plan was “180 degrees opposite” from Democrats’ health care proposals. “They’re proposing complete takeover of your health care by the federal government,” he said.

Johnson also mentioned he and other Republican Study Committee members had met with Trump at the White House to discuss the health care plan.

“I showed him some of the headlines, one from Fox News that said the Republican Study Committee’s health care plan is the fulfillment of President Trump’s challenge and his promise to make the Republican party the party of health care,” Johnson said. “He was grateful for that and encouraged by it.”