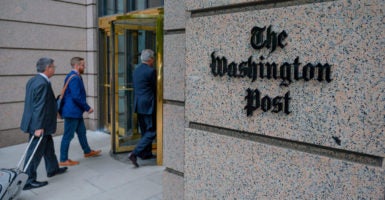 The Washington Post, the megaphone of the nation's capital for the American left, criticized the president for not being "more measured" in tone in announcing a brutal terrorist leader's demise. (Photo: Eric Baradat/Getty Images)

“Austere religious scholar”? How about terrorist?!

At a time when we should all share President Donald Trump’s exuberance about catching and destroying a terrorist, mass murderer, and rapist—a threat to our nation and all the civilized world—The Washington Post accused the president of “creating spectacle” around this great achievement.

Once again we are made aware of the enormous chasm that exists in America between the right and the left.

For those who see good and evil in the world, the defeat of evil is cause for celebration.

But for those on the left, who reject the moral clarity of our Judeo-Christian ethos, we live in an ambiguous murk of moral relativism, and any claim to moral clarity is itself the problem, not the solution, even when it comes to the apprehension and destruction of a notorious terrorist/murderer.

The Washington Post, the nation’s capital’s megaphone for the American left, criticized Trump for not being “more measured” in his tone, as was then-President Barack Obama, per the Post, after the elimination of Osama bin Laden.

We might recall that Obama’s two terms were bookended by two notable and revealing stands in international affairs.

Obama’s first major international appearance was in June 2009, when he traveled to Cairo, Egypt, to give a speech to the Muslim world with the objective of apologizing to them for the behavior of his country.

“9/11 was an enormous trauma to our country,” he said. “The fear and anger that it provoked was understandable, but in some cases, it led us to act contrary to our ideals.”

Nowhere did the American president convey to his worldwide Muslim audience that there is anything unique in American principles—principles that created our strong and prosperous nation—or anything worth paying attention to and emulating.

In December 2016, at the conclusion of Obama’s second term, his administration abandoned our friend and ally Israel by abstaining from a vote in the U.N. Security Council, allowing passage of a resolution condemning Israel for its settlement activity.

One Israeli minister said that the U.S. “abandoned Israel, its only ally in the Middle East,” while the Palestinian Authority called it “a victory.”

Anyone who loves our country and loves what it stands for will be as exuberant as Trump was in his announcement of the death of this evil man from ISIS.

Was the president being political? Of course. Politics is the means through which we as a nation define and choose sides.

You’re either going to be on the side of a free nation under God, identifying with the sanctity of life, liberty, and property, or not.

Trump and American conservatives are. The Washington Post and America’s left are not.

This is where we are today.

Sen. Lindsey Graham, R-S.C., summed it up well in his remarks at the White House.

Graham described the operation, saying that “the best of America confronted the worst of mankind, and the good guys won.”

We need to make another distinction between Trump and his predecessor. A mission such as this requires intense focus and coordination.

Trump did this despite daily scrutiny by a hostile press and being under constant siege by Democrats in Congress looking for an excuse to impeach him.

Graham was right to call this “a game-changer.” Putting fear in the hearts of terrorists is the only way, and Trump is doing it.

Many were killed on their side. On our side, only one military dog sustained serious injury.