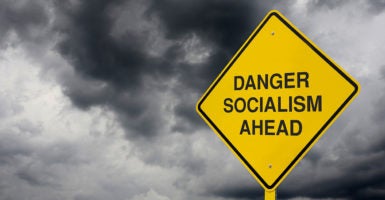 A Gallup poll found that 43% of Americans say socialism would be a good thing for the country. (Photo: bauhaus1000/Getty Images)

The rising tide of socialism in America is reaching a critical point as more Americans warm up to the idea of bigger, more intrusive government.

A Gallup poll earlier this year found that 43% of Americans say socialism would be a good thing for the country. Other polls show similar findings. The percentages are even higher for women, minorities, and young people.

If we hope to recognize this country 10 years from now, if we want to pass on to our children and grandchildren a nation that’s at least as free and prosperous as the one we inherited, we need to focus our efforts on turning everyday Americans away from the false promises of bigger government. And we need greater education and outreach to do it.

Certainly, one reason for this worrying trend is because average people see problems in this country they want solved, and a flurry of politicians, lobbying groups, and others excitedly offer them more big government in response, with many of their solutions verging on outright socialism. Just look at “Medicare for All,” free college tuition, and the Green New Deal as examples.

What many average Americans fail to see is that conservatives see the same problems they do and want to solve them, too, but just by different means. But how do we convince them that we have better answers?

Fortunately, we have several factors on our side.

First, we have the truth. Socialism has failed in every country, every time it’s been tried. Additionally, here in the United States and in countries that have softer “democratic socialism,” decades of data show that big-government policies continue to fail over and over again. More often than not, they end up hurting the very people they were supposed to help. Welfare in the United States is just one example.

Second, some of the polls showing Americans warming up to socialism also show that, when pressed, respondents didn’t understand what socialism actually involved.

While initially they loved the idea of free college tuition, free health care, and the Green New Deal, when they were told even a few details—like what it would cost them in new taxes, how their choices would go away, how bureaucrats in far-off places would be making decisions for them—they quickly turned against the proposals.

Third, new polling by The Heritage Foundation shows that the groups that seem the warmest to bigger government—women, minorities, and young people — actually agree with conservatives on many of our principles as long as we don’t call them “conservative.” Reaching out to these groups and others is where we can turn the tide and find the numbers needed to stand against the statist agenda.

When we asked a mix of conservative, moderate, and liberal young people if they could find something to like about the conservative philosophy, only 39% respond positively. But when we left off the conservative label and just asked about principles like smaller government and giving more power to individuals and communities versus creating more government programs, we saw agreement with those principles increase to 63%.

When we tested the same thing with the Hispanic community, agreement shot up from 38% to 61%. For African Americans, it rose from 24% to 57%.

This tells us that conservatives have the right principles and the right solutions—but we need to do a better job of communicating them.

These Americans want the same things we do: solutions to fight poverty and to ensure clean air and clean water. They want to know how we create higher-paying jobs, how we can deliver more affordable health care, and how we can preserve the freedoms we have without turning over our lives and our paychecks to government.

Over the last two days, The Heritage Foundation has convened nearly a thousand of its members to discuss how we message our solutions to new audiences and turn this warming to socialism trend around before it’s too late.

We are taking seriously the words of George Washington, who said, “The preservation of the sacred fire of liberty, and the destiny of the republican model of government, are … staked on the experiment entrusted to the hands of the American people.”

Indeed, our liberty—our destiny as a free nation—has been entrusted to our hands. The conservative movement must do everything we can to save it. And that means asking new people in new ways to join us.

This article originally was published in The Washington Times.