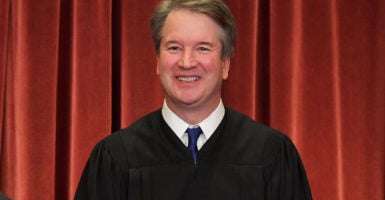 "Nothing scares the left more than the idea of having a judge who’s going to be faithful to the Constitution on the Supreme Court of the United States,” says Carrie Severino of Judicial Crisis Network. (Photo: Mandel Ngan/AFP/Getty Images)

A former law clerk to Supreme Court Justice Clarence Thomas says that liberals will stop at nothing to defeat the nomination of constitutional conservative justices to the high court.

Carrie Severino, now chief counsel with the Judicial Crisis Network, told an audience at the annual conservative Values Voter Summit in Washington on Saturday that the left has long viewed a liberal Supreme Court as a way to achieve its agenda when it can’t do so legislatively.

Many of the stories Severino shared with the audience came from her recent book, co-authored with columnist-commentator Mollie Hemingway, “Justice on Trial: The Kavanaugh Confirmation and the Future of the Supreme Court.” The book, about President Donald Trump’s nomination of federal Judge Brett M. Kavanaugh to the high court, reached No. 1 on the bestseller list on Amazon.

“We’ve seen through history that nothing scares the left more than the idea of having a judge who’s going to be faithful to the Constitution on the Supreme Court of the United States,” Severino said.

Senate confirmation hearings for conservative Supreme Court justices have become fiery battles, she said, because the high court has long been the left’s last political option.

Republicans long ago realized that liberal justices nominated by GOP presidents—such as Earl Warren, who was nominated by President Dwight Eisenhower—made court decisions that didn’t uphold the Constitution, she said.

“Some of the most liberal justices in our Supreme Court’s history were nominated by Republicans,” said Severino. “The left was very successful, using the courts to achieve in American government what they couldn’t do through the democratic process.”

Robert Bork, Thomas, and Kavanaugh all faced extremely contentious confirmation hearings. Kavanaugh and Thomas were both accused of sexual misconduct, but the accusations were not proven, and both were narrowly confirmed by the Senate. Bork’s nomination was defeated.

“We learned that the left is willing to stop at, literally, nothing to unseat a nominee,” Severino said.

The attacks by the left on conservative justices continue even after their Senate confirmation, she said. Although the majority of Americans didn’t believe the accusations against Thomas after his Senate committee hearing, the left to this day still vilifies him and continues to praise his accuser, Anita Hill.

“We have lived through decades now of a propaganda campaign by the left, by liberal academia, by—frankly—your high schools. This is what they’re teaching our children,” Severino said.

She said her recent book about Kavanaugh’s confirmation hearings before the Senate Judiciary Committee—written after interviews with more than 100 people—will help change the narrative and protect the reputations of justices in the future.

Severino’s book included an interview with Leland Keyser, who said she did not remember the events that Kavanaugh accuser Christine Blasey Ford described.

Despite pressure and intimidation attempts from mutual acquaintances who also knew Ford, Keyser refused to change her testimony.

Keyser “was someone who stood firm,” Severino said.

Republican senators in the hearings told her about the confidential FBI background report on Kavanaugh, Severino said. “‘If you saw that, you would know why at the end of the day everybody who voted for him after reading that was even more confident.’ They knew that this whole thing was a setup,” she said.

“We can’t let the left do this again,” Severino said.