The NBA’s Support for Tyranny 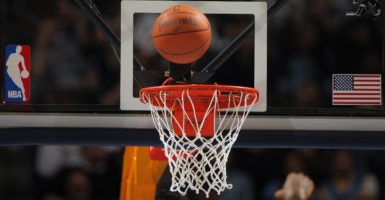 Apparently, sticking to principles is too high a price to pay when it might cut into the more than $8 billion in revenue the NBA earned in the 2017-2018 season. Pictured: A shot during a New York Knicks- Denver Nuggets game Nov. 16, 2010. (Photo: Doug Pensinger /Staff/Getty Images)

One hard truth about principles is that sticking to them can be inconvenient when it compromises your bottom line. This is the challenge the NBA top brass, players, and coaches have faced when it comes to Hong Kong.

They bungled that challenge and clearly have sold out. Apparently, sticking to principles is too high a price to pay when it might cut into the more than $8 billion in revenue the NBA earned in the 2017-2018 season.

Houston Rockets general manager Daryl Morey found himself and his franchise embroiled in controversy last Friday after he tweeted: “Fight For Freedom. Stand with Hong Kong.”

Morey’s tweet was met with immediate backlash in China, the NBA’s largest international market. China’s consulate general in Houston expressed his anger with Morey and the Rockets, telling them to immediately “clarify and correct the mistakes.” NBA sponsors and Chinese-based partners began to jump ship in short order.

Serious doubts were also cast on the viability of critical NBA partnerships with Chinese media giants. Tencent Holdings Limited, the exclusive official digital partner of the NBA in China, suspended all streaming related to the Rockets less than three months after publicizing an estimated $1.5 billion contract extension with the NBA. CCTV 5, China’s largest state sports channel, also canceled all programs or games that feature the Rockets.

China’s rapid, clearly coordinated response to Morey’s tweet sent the NBA into damage control. Morey quickly deleted his tweet, and Rockets owner Tilman Fertitta released a tweet of his own that night, which read: “Listen … @dmorey does NOT speak for the @HoustonRockets . Our presence in Tokyo is all about the promotion of the @NBA internationally and we are NOT a political organization.”

On Sunday, Morey delivered a humiliating apology, distancing himself from the Rockets and the NBA, and Mike Bass, the NBA’s chief communications officer, released the official league apology characterizing Morey’s tweet as “regrettable” and acknowledging Morey’s tweet “deeply offended many of our friends and fans in China,” i.e., the tyrannical government that controls everything and everyone in the country.

The league’s statement was echoed in an open letter by Brooklyn Nets owner Joe Tsai, who contemptuously dismissed the brave, dangerous fight of Hong Kong residents for democracy and liberty as a “third rail issue.”

Fallout continued on Tuesday with the announcement that Chinese state television has “decided to immediately halt” all broadcasting of NBA games played in country. It remains unclear if Tencent will discontinue streaming.

The NBA’s groveling response to Chinese criticism and censorship has drawn the ire of Republicans and Democrats alike. In a letter sent to NBA Commissioner Adam Silver on Monday, Sen. Josh Hawley, R-Mo., communicated his “disgust” for the league “kowtowing to the demands of one of the world’s most brutal regimes in the pursuit of profit,” and called on the NBA to cancel exhibition games in China.

Rep. Alexandria Ocasio-Cortez, D-N.Y., and Sen. Ted Cruz, R-Texas, signed a joint letter Wednesday along with six of their other colleagues saying it was “outrageous that the NBA has caved” to the Chinese government.

On Tuesday, Silver responded by saying he was “apologetic and sympathetic” to the anger of the Chinese and belatedly acknowledged that Morey enjoys the right to freedom of expression in the United States.

Unsurprisingly, China’s CCTV rebuked Silver’s assertion in a statement saying, “We believe that any remarks that challenge national sovereignty and social stability are not within the scope of freedom of speech.” All the political prisoners in jails and concentration camps all over China certainly know that to be true.

Silver is headed to Shanghai to further demean the NBA in an attempt to repair the relationship between the NBA and China and get the profits rolling in from China again.

In recent years, the NBA has been championed as the most “woke” of all professional sports leagues. While the NFL was enduring the Colin Kaepernick controversy, prominent NBA players and coaches, such as LeBron James and Gregg Popovich, rushed to Kaepernick’s defense to disrespect the American flag.

In 2017, the NBA moved its annual All-Star Game from Charlotte, North Carolina, to New Orleans over the North Carolina law that barred transgender individuals from using the bathroom of their choice.

In 2018, Silver said he was proud of players, coaches, and owners expressing their political views. This statement came on the heels of the 2018 World Champion Golden State Warriors’ decision to nix the customary White House visit in protest of President Donald Trump.

The NBA’s position on social justice is crystal clear. They are more than happy to virtue-signal their political correctness so long as it doesn’t affect their bottom line. North Carolina’s bathroom legislation proved too offensive to the league’s sensibilities, but they don’t find offensive what is happening in China and Hong Kong.

Evidently the NBA has no quarrel with China stifling freedom of expression, denying freedom of religion, and assaulting and imprisoning political dissidents.

Silver and the league have chosen to stuff their coffers while turning a blind eye to rampant human rights abuses perpetuated by the Chinese government. Such abuses include forced abortions and sterilizations, as well as the internment of an estimated 1 million Muslims in “reeducation camps”—concentration camps by another name.

The NBA’s behavior is reminiscent of actions taken by Hollywood during the 1930s to safeguard their business interests in a burgeoning film market in Germany.

Studio executives, blinded by greed, allowed the Nazis to censor scripts, purge Jews from credits, and put the brakes on films critical of Nazi Germany. Even more disturbing, the Nazis forced the head of MGM Germany, Frits Strengholt, to divorce his Jewish wife who subsequently ended up in a Nazi concentration camp.

Long gone are the days of largely apolitical athletes and widespread acceptance of attitudes like “shut up and dribble.” Activism in athletics is at an all-time high. Athletes are taking stands, and knees, regularly.

It is high time athletes, particularly those in the NBA, take a stand supporting Houston’s Morey, in defense of representative government and for the preservation of basic human liberty.

In a league full of political activists like James, Popovich and Steve Kerr, there should be no shortage of commentary on Silver’s shameful decision to bend the knee and succumb to censorship by communist China.