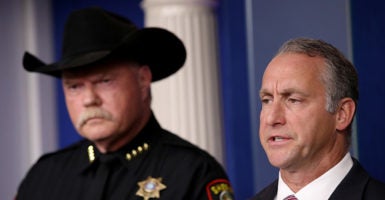 Matt Albence, acting director of U.S. Immigration and Customs Enforcement, defends his agents during a press briefing Thursday at the White House. With him is Sheriff Bill Waybourn of Tarrant County, Texas. (Photo: Win McNamee/Getty Images)

The chief of U.S. Immigration and Customs Enforcement called out members of Congress for demonizing federal agents while not addressing relevant laws.

“The safety and security of our personnel—officers and non-officers alike—is our primary concern. I think that’s why we’ve been so strident with our concerns about the ugly rhetoric that has been utilized around this issue and the vilification of the men and women of ICE,” Matt Albence, acting director of the agency, told The Daily Signal on Thursday during a White House press briefing.

A string of threats against ICE agents and facilities has occurred in recent months, including a shooting at one facility in San Antonio, Texas, and an attempted firebomb attack at another in Tacoma, Washington. Police also arrested protesters in Washington, D.C., for charging an ICE building.

Other lawmakers on the state and federal levels also have been highly critical of ICE and say they want to abolish the agency within the Department of Homeland Security.

This is a problem, Albence said, mainly because ICE is “merely enforcing the laws that Congress has passed.” He added:

It’s especially disheartening when it comes from individuals who actually have the ability to pass laws or change laws if they don’t like them. But, instead, they would rather vilify our officers for doing their sworn duties.

A third of our officers are military veterans. They were heroes before they ever strapped on a badge. They should be given the respect of any other law enforcement officer in this country.

Yes, I’m very concerned. It’s dangerous. Hopefully, those people that have opinions as to how immigration enforcement should be conducted [can] do so in a professional and responsible manner.

The ICE chief spoke the same day that other agencies released numbers on Trump administration efforts to control illegal immigration.

U.S. Customs and Border Protection released statistics on enforcement actions for September that show apprehensions along the Southwest border totaled 52,385, the lowest number of arrests for the year. They also show a 64% decline since the 144,116 apprehensions logged in May.

Also speaking at the press briefing was Sheriff Bill Waybourn of Tarrant County, Texas, who talked about the importance of working with ICE to keep local communities safe.

“The narrative of trying to go after ICE and immigration is very much like the narrative used against our Vietnam returning soldiers,” Waybourn said. “They’re eviscerating honorable people doing noble things, standing on the wall between good and evil for you and me.”

“If these people want to change things, Capitol Hill is down the street,” the sheriff said, adding that ICE agents “are not the policymakers.”

They were being held for such offenses as murder [and] sexual assualt of children. There was about 70 of them. There were robbers, kidnappers, people who committed arson, people who were DWI. If we return them, with this radical ruling out of California, where you have a federal judge making law for the nation, or attempting to, it will put our communities in jeopardy.

The Texas sheriff said that 72% of illegal immigrants arrested in his jurisdiction are repeat offenders.

“So if we have to turn them loose, or they get released, they are coming back to your neighborhood and my neighborhood,”  Waybourn said. “These drunks will run over your children and they will run over my children. And if that happens, I know you would want—and I would want for you—the full force of the law. Immigration is part of that full force.”

Albence, the ICE chief, said the California ruling will affect at least 43 states.

“Rulings from any individual federal court sitting in a single judicial district purporting to cripple ICE authorities on a nationwide basis puts people at risk,” Albence said. “Innocent victims whose lives will be changed for the worst all across our great country. And we could have stopped it.”