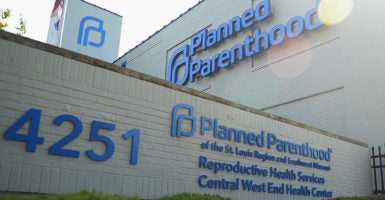 The nation’s largest abortion provider built an 18,000-square-foot facility in secret to circumvent protests and other setbacks, an official says. Pictured: The exterior of the Planned Parenthood clinic in St Louis, Missouri. which is 10 to 15 miles away and fighting to stay open. (Photo: Michael Thomas/Getty Images)

Planned Parenthood secretly has built an 18,000-square-foot “megaclinic” in southern Illinois, 10 to 15 miles from the last abortion clinic in neighboring Missouri, which is in a fight to keep its license.

The nation’s largest abortion provider built the nearly complete facility in secret to circumvent protests and other setbacks that could suspend construction, said Colleen McNicholas, chief medical officer of Planned Parenthood of the St. Louis Region and Southwest Missouri.

“We were really intentional and thoughtful about making sure that we were able to complete this project as expeditiously as possible because we saw the writing on the wall—patients need better access, so we wanted to get it open as quickly as we could,” McNicholas told CBS News.

Construction started in August 2018, with Planned Parenthood using “a shell company to construct the facility, leaving no public trace that the former medical office would become one of the largest abortion clinics in the country,” according to CBS News, which visited the construction site in August, about a year later.

Planned Parenthood says the abortion clinic should be ready to open later this month. It is not clear how much the project cost.

Pro-life organizations say the development is an example of Planned Parenthood’s operating as usual.

Jill Stanek, the national campaign chairman for the Susan B. Anthony List, said in a written statement to The Daily Signal that Planned Parenthood is staying true to its mission of abortion on demand and without apology.

“Once again, Planned Parenthood has proven they are in the business of abortion on demand,” said Stanek, an Illinois native, adding:

As Missourians expand protections for unborn children and their mothers, Planned Parenthood is working right next door to make Illinois the late-term abortion capital of the Midwest.

The Missouri Stands for the Unborn Act is one of the strongest pro-life laws in the country, including provisions that limit late-term abortions—a policy 82 percent of Missouri voters support—but Planned Parenthood seeks to undermine these protections for profit.

This secretly constructed mega-facility placed strategically at Missouri’s backdoor will perform abortions up to 24 weeks [of pregnancy], as Illinois’ extreme abortion law allows. It’s clear Planned Parenthood thinks nothing of preying on vulnerable women to advance their extreme abortion agenda.

“How appropriate that Planned Parenthood has built a secret ‘mega-center’ to go with its mega-sized status as America’s biggest abortion business–fully one-third of all U.S. abortions are done at a Planned Parenthood facility,”  Aden said.

March for Life, another pro-life organization, said the news indicates Planned Parenthood is focused on performing abortions even as the practice becomes less and less accepted in society.