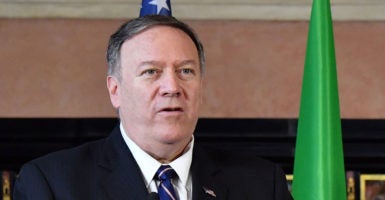 Secretary of State Mike Pompeo confirmed Wednesday that he was on the July 25 phone call between President Donald Trump and Ukrainian President Volodymyr Zelenskyy.

Pompeo spoke at a press conference in Rome after being subpoenaed to testify by Democratic chairmen of three House committees on Sept. 27. The House Democrats launched an impeachment inquiry into Trump after a whistleblower complaint accused the president of asking Ukrainian officials to look into the activities in Ukraine of former Vice President Joe Biden and his son, Hunter Biden.

The subpoena follows reports that Pompeo was on the call with Zelenskyy, but Wednesday was the first time he confirmed it. He dodged the question two weeks earlier while speaking to ABC’s Martha Raddatz on-air.

“I know precisely what the American policy is with respect to Ukraine. It’s been remarkably consistent and we will continue to try to drive those set of outcomes.”

Pompeo continued on to explain why the phone call took place, noting that “it was about helping the Ukrainians to get graft out and corruption out,” noting that it is part of their job to do so.

“It’s what our team, including Ambassador [Kurt] Volker, were focused on, was taking down the threat that Russia poses there in Ukraine,” Pompeo said. “It was about helping the Ukrainians to get graft out and corruption outside of their government and to help now this new government in the Ukraine build a successful, thriving economy.”

The secretary of state has refused to comply with Congress’ subpoena because it “deeply violate[s] fundamental principles of separation of powers.” He added Wednesday that he “won’t tolerate folks on Capitol Hill bullying” employees of the State Department.

“The response that I provided to them was one that acknowledged that we will, of course, do our constitutional duty to cooperate with this co-equal branch,” Pompeo said. “But we are going to do so in a way that is consistent with the fundamental values of the American system.”

“And we won’t tolerate folks on Capitol Hill bullying, intimidating State Department employees. That’s unacceptable, and it’s not something that I’m going to permit to happen.”