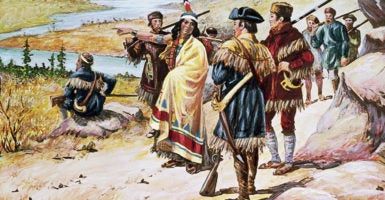 This 19th-century illustration by Alfred Russell depicts the Native American guide Sacagawea showing the way West to the Lewis and Clark expedition from what is now Mandan, North Dakota, through the Rocky Mountains. (Photo: Getty Images)

CHARLOTTESVILLE, Virginia—Sacagawea, the famous member of the Shoshone tribe, was crucial to the team of explorers who blazed a trail for western expansion of the United States.

More statues are dedicated to Sacagawea, it turns out, than to any other American woman.

However, how she is depicted in one statue that has stood for 100 years has created yet another stir in Charlottesville, the hometown of Thomas Jefferson. The Virginia-born president commissioned the celebrated exploration led by Meriwether Lewis and William Clark from 1803 to 1806.

The Charlottesville City Council intends to schedule a work session to hear from descendents of Sacagawea and other Native Americans about the future of the statue.

City spokesman Brian Wheeler said the tentative plan is to hold the work session in late October, though September was the original target.

The bronze statue featuring Sacagawea at the intersection of Ridge and Main streets is listed on the National Register of Historic Places.

The city put the statue in place in 1919. It was sculpted by Charles Keck and paid for by Paul Goodloe McIntire, a stockbroker from Virginia.

McIntire also covered the original cost of the city’s controversial Confederate statues, the proposed removal of which led in August 2017 to white nationalists descending on the city, where they clashed in the streets with “anti-fascists” known as Antifa amid peaceful protesters.

The statue depicts Lewis and Clark standing and looking westward, with Sacagawea squatting at their feet as if tracking something.

The city installed a plaque in 2009 explaining the Native American’s role in guiding the explorers.

The statue stands atop a granite base that describes the explorers’ mission and features carvings that show a buffalo hunt, a tribal council, an American eagle, and the official seals of the United States and the state of Virginia.

The council’s review of the statue arose in part because the city anticipates $2 million in state Department of Transportation funds for work on its downtown streetscape, which would require moving the statue about 20 feet.

Walker, an independent, declined an interview with The Daily Signal.

In June, the council opted against spending $75,000 to form a commission to review options on what to do about the statue. Instead, it decided to use the money to pay for travel costs for Sacagawea’s descendants and other Native Americans to travel to Charlottesville to offer their perspectives.

“What we agreed to as a council is that we want to hear from descendants of Sacagawea and understand from that part of the community,” Vice Mayor Heather Hill, a Democrat, told The Daily Signal in an interview outside City Hall.

“We are in a position where we have to move it 20 feet. One of my colleagues raised the idea of relocating it or removing it,” Hill said. “There’s just different opinions. Obviously, some see it as art and that she is guiding Lewis and Clark on their expedition. Others see it as a [physical posture where] she is not being elevated. We’ve heard compelling arguments each way.”

‘Waste of Time, Money, and Effort’

Supporters and opponents of the city’s statues of Confederate Gens. Robert E. Lee and Thomas “Stonewall” Jackson are in court arguing over a Virginia state law that protects all war memorials from city interference.

By contrast, the statue of Lewis, Clark, and Sacagawea likely wouldn’t have any legal protection and could be removed based on a decision by the City Council.

“It’s a waste of time, money, and effort. The concerns I’ve heard expressed about the position of Sacagawea, [that] she’s crouching down, no, she’s tracking,” former Councilor Rob Schilling told The Daily Signal.

“To spend time on things like that in this community, which has all manner of other problems that are continually falling through the cracks or not being addressed, because we’re getting involved in all those social issues and trying to somehow right the wrongs of history, is just a total waste of time and money and it’s just very counterproductive,” said Schilling, now a local talk radio host. “I think it’s a symptom of people today generally having way too much time on their hands.”

Sacagawea, who lived from 1788 to 1812, accompanied the Lewis and Clark Corps of Discovery in 1805 and 1806 from the northern Plains through the Rocky Mountains, all the way to the Pacific Ocean. She began the journey as a new mother in her late teens.

Most on the expedition team spoke only English, but Sacagawea was bilingual, speaking the tribal languages Hidatsa and Shoshone, which was key as the explorers encountered various tribes that might have otherwise expected a hostile party.

She gained respect for being cool in a crisis when a boat capsized and she was able to gather and preserve important books, medicines, navigational instruments, and other tools.

Her legacy is marked by monuments, memorials, schools, and statues, mostly along the Lewis and Clark National Historic Trail as well as in the U.S. Capitol.

Sacagawea has been depicted on dollar coins and was inducted into the National Women’s Hall of Fame. In early 2001, in a White House ceremony, President Bill Clinton declared her an honorary scout of the Corps of Discovery.

During the council’s June meeting, Charlottesville resident Grace Hays said that, as a Native American, the statue pained her.

“When you get close to her face, you kind of see that she looks concerned at the very least,” Hays told the council. “Maybe afraid. She’s crouching, she’s hiding, she’s there with her baby.”

“I have my feelings about the statue,” Hays said. “I also feel like her family, her descendants’ feelings, are really the most important in terms of how she’s portrayed.”

Others called for outright removal of the statue, including Anthony Guy Lopez, a Native American alumnus of the University of Virginia and founder of the university’s Indigenous Studies Center Initiative.

“Various interpretations have been offered to explain her odd position. Perhaps she was tracking something. Or she is looking downward at the waters of the Pacific Ocean,” Lopez wrote in an op-ed for The Daily Progress newspaper, adding:

Whatever the explanation, the test is to switch Sacagawea’s pose with Lewis or Clark, or some other man. It is difficult, if not impossible, to find any male American leader depicted in such an awkward manner in public statuary.

Further, after reviewing the several dozen other depictions of Sacagawea in public art across the U.S., one would be challenged to find a more unflattering depiction of Sacagawea. For that reason alone, the city should consider permanently removing the statue from the public square.

‘She Was a Scout’

In addition to the arguments over statues of historical figures, the council voted earlier this year to do away with celebrating Thomas Jefferson’s birthday as a city holiday.

Such controversies shouldn’t be lumped together, warned former Mayor Michael Signer, a Democrat who is still a member of the council.

“For me, I think it’s important to view all of these on a case-by-case basis,” Signer told The Daily Signal. “There is a temptation in the media to lump them all together to broad caricatures, to say Charlottesville is this way or all monuments are this way or all history is this way. I just don’t think that’s accurate.”

“I, for instance, voted for changing the [Jefferson] holiday,” he said. “I had a different opinion about the Lewis and Clark statue. I thought that it should stay and be narrated, recontextualized, and that would be fine. I think these are case-by-case decisions to be made locally in most cases, and on the basis of community input.”

Charlottesville long has faced thorny issues over history, said Jannette Martin, a retired teacher with a strong interest in history who now is president of the Albemarle-Charlottesville NAACP.

“Some will find it offensive for a woman who is a Native American to not be standing. But she was a scout,” Martin told The Daily Signal. “How many people know the story of Lewis and Clark? You can’t win.”