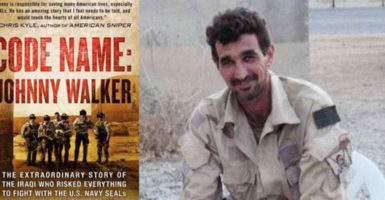 How did an Iraqi interpreter for the U.S. military get the code name Johnny Walker?

Walker, who became a U.S. citizen last week, worked with legendary American sniper Chris Kyle and other U.S. special operations forces in Iraq beginning in 2003. The nickname sprang out of that experience.

At first, Walker says in fairly good English, he enjoyed helping the U.S. mission in Iraq because it meant making more money and gaining prestige.

“One time the American convoy gave me a ride to my house,” Walker, 54, tells The Daily Signal, “and my wife, my family, all of them they went outside and they just wanted to be proud. ‘Oh, this is my son, this is my husband.’”

But after he began working with Navy SEALs, Walker says in a phone interview, he began to agree with what the Americans believed and were trying to achieve. He also saw how the Americans were helping his own people.

“I saw that when we had few targets, and then saw how much the bad guys [were] hiding explosive RPGs, you name it, on the houses in the middle of the civilians,” Walker says, referring to rocket-propelled grenades.

“And it’s like, those people, they are not going to build [a] country. You will never build country with weapon. And this is where things changed from money, from dream, to something. I believe I have to do the right things.”

Walker is the author, with Jim DeFelice, of the 2014 book “Code Name: Johnny Walker: The Extraordinary Story of the Iraqi Who Risked Everything to Fight with the U.S. Navy SEALs.” DeFelice also helped Kyle write his best-selling book, “American Sniper.”

Walker’s own journey began in his hometown of Mosul, in northern Iraq. Growing up, he says, he had only one dream.

“I wanted to have a small, wood house somewhere in the United States in front of the lake, at the edge of the mountains.”

But he put that dream on pause when life took a turn for the worse during Iraq dictator Saddam Hussein’s tumultuous reign.

The Saddam regime “ruined everything in our life,” Walker says. “Stealing our dream.”

“You will have no spot for dreams because reality is crushing you, puts you under pressure,” Walker recalls of the time before he worked for the U.S. military.

He now lives in San Diego with his wife and four children, training and educating special operations forces about Iraqi culture and survival before they deploy.

Walker fondly remembers Kyle, the now-famous Navy SEAL sniper he began working with around 2006. Kyle was fatally shot by a fellow veteran he was trying to help in 2013.

“Chris is a hero, there’s no question about that,” Walker says. “And he said he worked among heroes too. Most of the special operations teams, they are heroes. They are Chris Kyle … they provide us the freedom we enjoy every second.”

Walker says Kyle also taught him something very valuable: how to be humble.

And “he taught me how to be strong against struggle,” Walker adds.

It was a couple of years before he began working with Kyle that American forces gave him the nickname Johnny Walker.

He enjoys the whisky brand Johnnie Walker, he says. One day when he and his American colleagues didn’t have a mission, he recalls, he skirted the rules and drank some whisky.

“I end up sleeping with the bottle in my bed … and they look at me hugging the bottle and sleeping, [and say], ‘Oh, Johnny Walker! All right, you’re named Johnny Walker from now.’”

Despite the amusing tale behind the nickname, Walker uses it to this day to protect his family, even after living in the United States since 2009.

Walker became an American citizen on March 20, the day before he spoke to The Daily Signal and a moment he says he’ll never forget.

All this country requires is “loyalty and love,” Walker says.

“If you have it, it’s a beautiful lady, America. She will love you back, and she will be loyal to you no matter where you are.”

Walker says he is a big believer in lawful immigration.

“I’m not against immigrants. I am immigrant. I just [had] my citizenship yesterday,” he says. “But I don’t want to have weapons next to me when I escort my kids back and forth to school or somewhere.”

Walker says he already felt like a U.S. citizen before receiving the actual paperwork, since he was around so many Americans on the battlefield.

One of the things we need, as Americans … and I can call myself American now … is to not take anything for granted. We have to appreciate what we have. Tomorrow is ours. Let’s work for tomorrow.