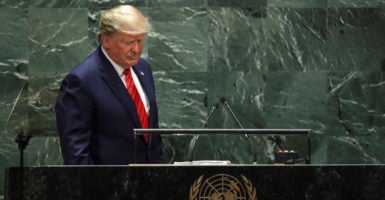 Those hoping for fireworks up in Turtle Bay for President Donald Trump were disappointed Tuesday morning. No references to Rocket Man. Instead, Trump’s third address to the United Nations was shockingly traditional in tone and presentation.

Although the speech, as is the president’s tendency, touted the administration’s economic accomplishments up front, it quickly shifted focus to the major foreign policy priorities of his administration: China, Iran, Venezuela, immigration, and trade.

In each of these five areas, Trump expressed clearly the objectives of the U.S. and his steadfast commitment to achieving them.

1. China. The president pulled no punches in accusing China of abusing and taking advantage of the international system.

“Not only has China declined to adopt promised reforms, it has embraced an economic model dependent on massive market barriers, heavy state subsidies, currency manipulation, product dumping, forced technology transfers, and the theft of intellectual property and also trade secrets on a grand scale,” he said.

Trump expressed hope for a trade deal with China, but reiterated that he will not “accept a bad deal for the American people.”

2. Iran. Although the president appeared open to negotiations with Iran a few weeks ago, he has taken a harder line in the wake of Iran’s attack on oil fields in Saudi Arabia.

All nations have a duty to act. No responsible government should subsidize Iran’s bloodlust. As long as Iran’s menacing behavior continues, sanctions will not be lifted, they will be tightened. Iran’s leaders will have turned a proud nation into just another cautionary tale of what happens when a ruling class abandons its people and embarks on a crusade for personal power and riches.

3. Venezuela. Trump spoke directly to the people of Venezuela, expressing America’s support and commitment to help them once democracy is restored.

He also condemned Venezuelan President Nicolas Maduro as a “Cuban puppet” who is “protected by Cuban bodyguards, hiding from his own people while Cuba plunders Venezuela’s oil wealth to sustain its own corrupt, communist rule.”

Trump stressed the devastating threat posed by socialism, which he called “the wrecker of nations and destroyer of societies.”

4. Immigration. The president was unapologetic in defending his position on countering illegal immigration, noting that every nation has the absolute right and responsibility to protect its borders.

Trump also went on the offensive by accusing those who oppose border enforcement of enabling traffickers and encouraging people to endanger themselves:

I have a message for those open-border activists, who cloak themselves in the rhetoric of social justice. Your policies are not just. Your policies are cruel and evil. You put your own false sense of virtue before the lives of countless innocent people.

5. Trade. The president reiterated his long-held belief that the system of international trade is exploited by countries that flout the rules to the detriment of countries such as the U.S. that do not.

“Our goal is simple—we want balanced trade that is both fair and reciprocal,” he said.

Although Trump made his position clear in each of these five key areas, the speech did not break any new ground nor add new details on future direction.

The point, evidently, was to underscore his determination to maintain or increase pressure until the disputes are resolved to the president’s satisfaction.

Perhaps one of the more notable parts of the speech is what was not included: specific references to the United Nations or its role in the world. After the obligatory acknowledgement of the history of the U.N. as the “world’s biggest stage,” Trump barely mentioned the U.N. at all.

He cited a U.N. Human Rights Council report as support for his criticism of Venezuela, but then criticized the U.N. human rights system for overreaching on abortion, noting: “Global bureaucrats have absolutely no business attacking the sovereignty of nations that wish to protect innocent life.”

Likewise, Trump rejected the effort to advance gun restrictions through the U.N. by asserting:

There is no circumstance under which the United States will allow international interests to trample on the rights of our citizens, including the right to self-defense. That is why this year I announced that we will never ratify the U.N. Arms Trade Treaty, which would threaten the liberties of law-abiding American citizens.

The deliberate decision to downplay the United Nations is curious, considering the concern expressed by U.S. officials about the expansion of Chinese influence in the U.N. It is hard to think of a better time or place to voice this concern to the U.N. membership.

Not every part of the U.N. is important, and the U.S. should reject or oppose objectionable policies and proposals. But if the U.S. is to protect its interests, it needs to make clear that America remains committed to the parts of the U.N. that are useful, even critical, to advancing America’s foreign policy priorities.

For a leader who prides himself on putting his nation’s interests first, this is a regrettable oversight.

Overall, while it lacked the bombast of previous years, Trump’s third U.N. speech effectively propounded the foreign policies of his administration. And it provided a nice encapsulation of the president’s philosophical outlook:

If you want freedom, take pride in your country,” the president said. “If you want democracy, hold on to your sovereignty. And if you want peace, love your nation. Wise leaders always put the good of their own people and their own country first.