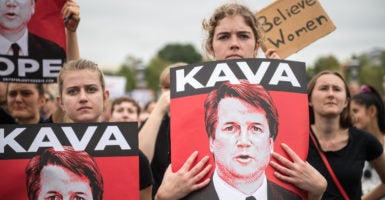 Women protest outside of the Supreme Court during the confirmation hearings of Justice Brett Kavanaugh (Credit: Roberto Schmidt/ Contributor/Getty Images)

This week on “Problematic Women,” we talk to Elizabeth Slattery, legal fellow at The Heritage Foundation and host of the “SCOTUS 101” podcast, about the new allegation against Supreme Court Justice Brett Kavanaugh. She addresses whether the accusation has any credibility and what it means for the future of the high court.

—The public dispute between ousted Planned Parenthood President Leana Wen and her former employer: why she was fired, what the dispute was over, and what it reveals about the nation’s largest abortion provider.

—Thousands of University of Georgia students and fans came together for a “Pink Out” at the Bulldogs’ home football game against Arkansas State in honor of the visiting team’s head coach, who lost his wife to breast cancer over the summer.

—We crown great-grandmother and florist Barronelle Stutzman as Problematic Woman of the Week for continuing her fight for religious freedom by asking the Supreme Court to reconsider her case.